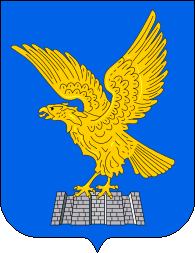 Blazon: Azure an eagle rising, wings elevated and addorsed or perched on a city wall proper

These are the kind of arms I really like: ones that tell a story (no matter how improbable) in a very compressed format. This device goes back to the ancient Roman city of Aquileia. Legend has it that the city was founded when a group of citizens followed an eagle (aquila in Latin) to the site where they founded the city. Aquileia eventually expanded into the Patriarchate of Aquileia, and in 1077, the patriarch was granted the title of Duke of Friuli, resulting in the creation of the Patria del Friuli. Venice acquired Friuli in 1420, and the territory got passed back and forth between Venice and Austria until it ended up in the Kingdom of Italy. Through all of this, the eagle or on azure seems to have been pretty constant, though it was typically displayed and armed gules. The position adjustment and the addition of the wall seem to have been modern tweaks. I always really enjoy finding arms that can be traced back so far!

Blazon: Azure a church double-towered surmounted by a city wall or

The church in the arms is St. Martin’s, a local landmark that was frequently used as a town seal before the arms were officially granted. The church served a dual purpose in times of war, as it was also built to withstand attacks.

Blazon: Argent on a mount vert a city wall with a gate tower or, masoned and windowed sable, in base water barry wavy of the field and azure

The mount refers to the name of the city (Berg meaning “mountain”). The wall and gate might be an allusion to the second half of the name; Vöstenhof is derived from “festen hof,” an archaic term for “manor house” or “castle.”

Blazon: Or a double-headed eagle displayed sable, armed of the field, langued and nimbed gules, charged on the breast with an escutcheon of the last a city wall with portcullis and three towers, the center with a pointed roof or

The escutcheon in the above arms seems to have been in use for a fairly long time (at least since 1932). The eagle seems to have come into use around 2010, though it is unclear why. 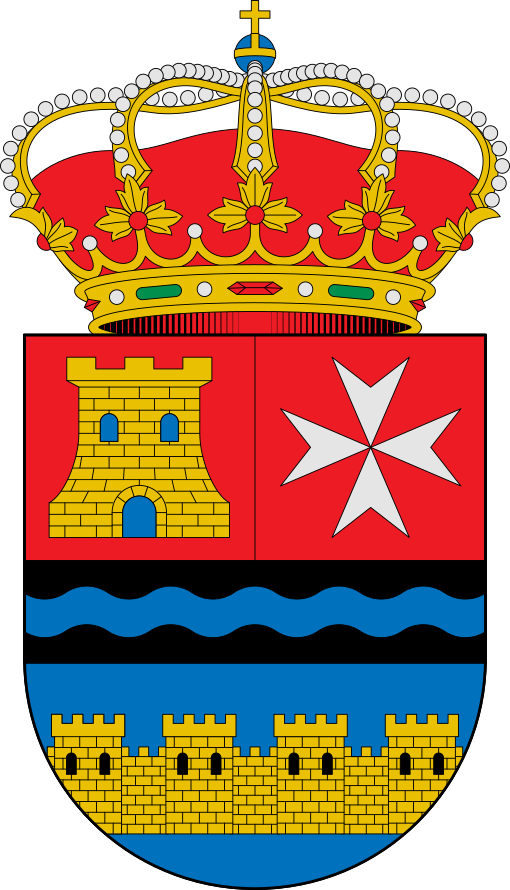 Blazon: Per fess sable charged with a bar wavy azure, I per pale gules a tower or windowed of the second and of the third a Maltese cross argent, II of the second a wall of four towers of the fourth windowed and masoned of the first

The wall in the lower half of the arms presumably represents the local Roman observation tower. The town’s name derives from the sandy terrain (arenales) and its history with the Order of St. John, which is likely the source of the Maltese cross.

Blazon: Per pale gules a wall and in chief a cross couped* or and azure a fess dancetty argent

*The cross seems to be depicted variously as a plain cross couped, a cross paté, and a crucifix, but the blazon provides no specifics beyond “Kreuz.”

Blazon: Vert a city wall with two towers argent, windowed and ported gules, on each tower a stag passant towards the interior proper; in chief a castle triple-towered of the second, windowed gules, on each exterior tower an eagle combatant, wings displayed and inverted sable