Blazon: Per pale azure and or, a plowshare fesswise between three sheaves of wheat and a vine leafed and fructed conjoined in base, all counterchanged

The vine may be an allusion to the Pernau monastery, who owned vineyards in the area.

The vine motif seems to be extremely old, possibly dating back to 1331 or even earlier. It remains consistent across many different versions of the arms. The escutcheons in the chief are probably derived from the arms of the Electoral Palatinate. The lion was the symbol of the County Palatine. The argent and azure fusils originally belonged to the Counts of Bogen, but were adopted by the House of Wittelsbach in 1247, and are often used for Bavaria.

*I have not had any luck identifying the specific types of vines shown here. Most depictions of the arms do go out of their way to distinguish between the dexter and sinister vines, which is a good indication that they are intended to be different, but I cannot determine the exact species.

Blazon: Per pale gules a grapevine fructed in bend sinister or and azure an ear of wheat in bend of the second, pointé in base of the last a pine tree vert

Blazon: Per fess argent a vine issuant from the partition line leafed of three 1 and 2 and fructed of four bunches of grapes in saltire gules and sable pointé in base argent a cup gules charged with a crown of the field 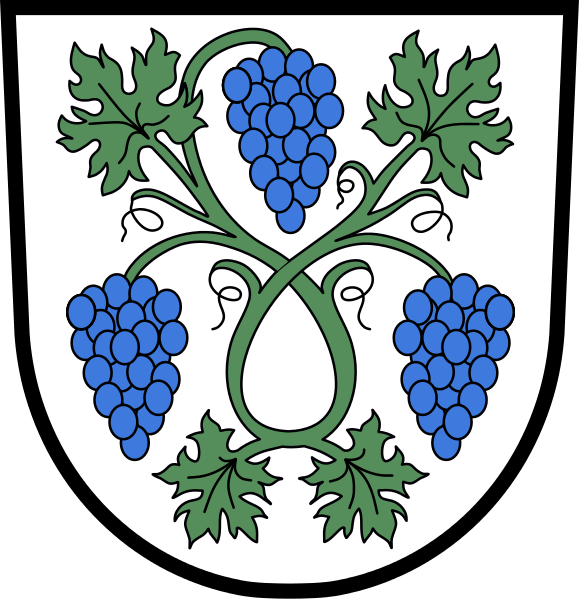 Blazon: Argent a grapevine nowed vert leafed of three and fructed with as many bunches of grapes azure 1 and 2

Blazon: Per fess I barry of ten gules and or, II of the first a vine plant eradicated fructed with two bunches of grapes, all within a bordure of the second