Blazon: Argent on a pale vert between two flanks gules, the dexter charged with five trefoils in pale  and the sinister with a chain in pale, a triple mount in base and a stone hut of the field

Donnersbachwald technically no longer exists, as it was incorporated into the municipality of Irdning-Donnersbachtal in 2015. I’d assume that the mount refers to the local geography, which is extremely common for municipal arms. The vert and argent tinctures may be a reference to the Styrian arms, but that’s only speculation. Unfortunately, I’ve got nothing on the stone hut (or Kuppelbau, as the German blazon has it). My guess is that it’s a distinctive archeological construction in the region, which is also a pretty common motif for cities and towns, but I can’t find any mention of something like that. And if you’re wondering why I’ve called the charges on the sides “flanks,” see here. TL;DR it’s a charge specific to German heraldry, and they’re not the same things as flaunches.

Blazon: Per fess argent a trefoil issuant from the partition line vert and sable a lock plate or

The trefoil is a reference to the nearby monastery of Gleink, which used gules a trefoil vert as their arms. The lock plate allegedly comes from the arms of the Stadler family, though I cannot confirm this.

Blazon: Per fess argent a lark volant sable and vert three trefoils of the first

The lower half of the shield symbolizes the “broad meadow” of the city’s name.

Blazon: Gules on a chevron or three estoiles sable, on a chief argent as many trefoils slipped vert

Crest: On a wreath gules and or an eagle wings displayed and elevated and head downwards and to the sinister proper holding in the beak an ear of wheat stalked and leaved or

The arms in the primary part of the shield belong to the Carre family, who founded the local almshouse and grammar school, while the trefoils are from the arms of the Harveys. The eagle represents the town’s associations with the Royal Air Force, while the wheat represents local agriculture. 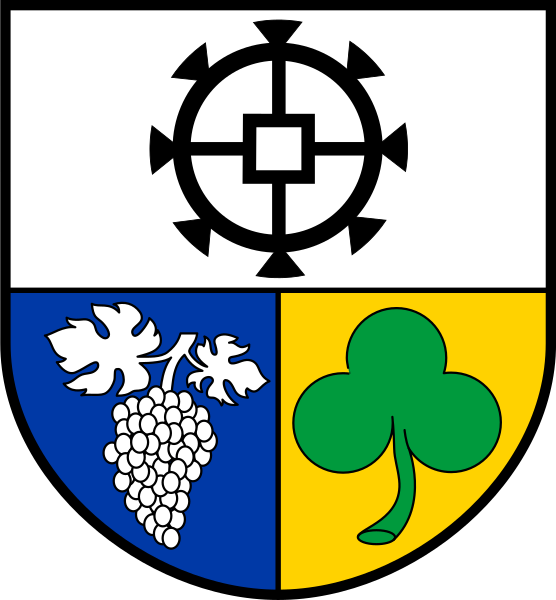 Blazon: Per fess argent a four-spoked cogwheel sable (from the former arms of Mühlhausen) and per pale azure a bunch of grapes slipped and leaved argent (from the arms of Tairnbach) and or a trefoil vert (from Rettigheim)

Blazon: Azure on a pile argent between on the dexter an anchor on the sinister a grill and in base a trefoil slipped or a vase gules issuant therefrom a spray of lilies proper

Crest: Issuant from a mural crown gules the mast of a ship proper flying a flag argent a cross gules

Supporters: On the dexter a medieval fisherman holding in the exterior hand a net and on the sinister holding a book and a staff, all proper

Motto: Per mare per ecclesiam (Through the sea, through the Church)