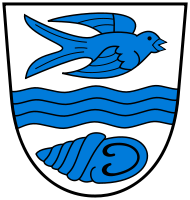 Blazon: Argent a fess wavy between a swallow volant to the sinister and a tower snail shell azure

From what I can find, the good people of Schwalldorf really wanted canting arms. However, this was slightly thwarted by the small issue of not knowing exactly what their town was named after, which is typically a prerequisite. Undaunted, they instead decided to represent as many theories as possible in their arms! The fess wavy, as it often does, stands for water – in this case, the mineral springs known as Schwalbrunnen. The swallow, or Schwalben, is another potentially canting element, and the snail shell, or Schnecke is a third (although the last represents the population center of Schneckenhof, and not necessarily the entire area).