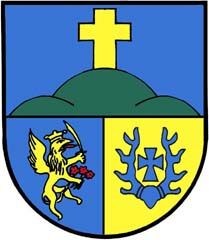 Blazon: Per fess azure a passion cross or upon a triple mount in base proper and per pale of the first a griffin counter-segreant crowned and bearing a scimitar in the left of the second and in the right three roses gules, slipped and leaved proper, and of the second between a stag’s attires a cross paté of the first.

I don’t have a direct source for the cross, but it seems like a pretty standard thing to put on your municipal arms if you are a small Christian community. However, I do have sources for the base half of the shield. The griffin – crown, scimitar, roses, and all – is taken from the Esterházy arms, which are fucking amazing. I will have to come back to those sometime in the future, because WOW. The Esterházys controlled roughly one-third of the area that currently forms Draßburg from sometime in the 1620s through 1848. Similarly, the other quarter of the shield is derived from the Zichy arms; they controlled the other two-thirds of the area from 1672 to 1715 and from 1795 to 1848. (The Zichys sold the area to the Mesko family in 1715, but after eighty years’ worth of legal proceedings, the Meskos were ordered to give it back.) If you’re wondering what happened in 1848, well… let’s just say the Austrian nobility went into a sharp decline right around then.

Blazon: Per fess argent a stag’s attires gules and vert a hunting horn of the first

The nearby forest, the Kaiserwald, was frequently used for hunting since the 13th century, which is reflected in the charges here.

Arms of Unstrut-Hainich, Germany Blazon: Per quarterly, I or an eagle displayed sable, armed gules, crowned of the field, and charged with two mill-rinds argent; II azure a lion rampant barry of eight gules and argent armed, langued, and crowned … Continue reading →

From The Handbook to English Heraldry by Charles Boutell, p243 Seal of Robert Graham of Kinpoint, 1433 Blazon: (?) on a chief three escallops Supporters: Two lions rampant The crest appears to be a stag’s attire.

Arms of Aachen, Germany Blazon: Azure a swan wings expanded argent beaked and legged sable standing on a stag’s attire argent horns or; on a chief of the last a lion passant of the third