I have a little more confidence that Hedd existed, compared to some of the other individuals listed in the manuscript. It’s possible that he was the five-times-great-grandson of Rhodri Mawr, who conquered and ruled much of modern Wales. (It’s also possible that this descent was somewhat fabricated.) Most of the sources I’ve found refer to him as Hedd ap Alunog instead, and connect him to Llanfair Talhearn (a specific village) rather than Uwch Aled, which seems to have been a rural district in the same general area. 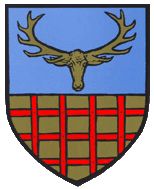 Blazon: Per fess azure a stag’s head caboshed or and of the last latticed gules

Oddly, while fretty is an extremely common pattern in English heraldry, its 90-degree-turned cousin latticed doesn’t show up very often. The deer’s head is kind of a canting element; the town used to be known as “Gelenschroet”, and “jelen” is a Slavic word for “deer.” The lattice is a symbol of St. Lawrence; while he was being roasted to death on a gridiron, he announced, “Turn me over, I’m done on this side!” This led to his patronage of cooks and comedians. The Edelschrott parish church is also dedicated to him. (The gridiron or grill has shown up a few times on this blog in connection with St. Lawrence.)

Blazon: Azure a stag’s head proper, in base the letters BRVN or

The deer’s head is apparently drawn from the capital city, also named Brindisi. “Brun” or “Brention” is an ancient word for “deer” in Messapian, an ancient local tribe. The city got that name from its shoreline, which supposedly looks like a deer’s antlers. (I can kind of see it, I guess? I probably wouldn’t describe it as deer-shaped, but I’m also not an ancient Italian.)

Blazon: Or a stag statant gules; on a chief of the last, an ear of wheat fesswise of the first

Sadly, information is thin on the ground here. It sounds like the town was, at one point, included in the duchy of Swabia, but the three black lions don’t make an appearance here. Given how many other local municipalities use or and gules as a reference to Tübingen’s arms, it seems reasonable to speculate that the same applies here, but I don’t know for sure.

Blazon: Per fess I per bend sinister gules two hammers in saltire or and of the last a plowshare of the first, II of the first a stag statant of the second

The stag is drawn from the arms of the county that shares its name with the village, while the hammers represent the local steelworks and the plowshare stands for agriculture.

Blazon: Or a stag trippant gules within a bordure parted nebuly argent and azure

The stag is a counterchanged version of that in the arms of Sigmaringen. It is possible that the tinctures of the bordure are derived from the arms of the lords of Wildenstein, who were the first recorded owners of the town, but this is pure speculation. 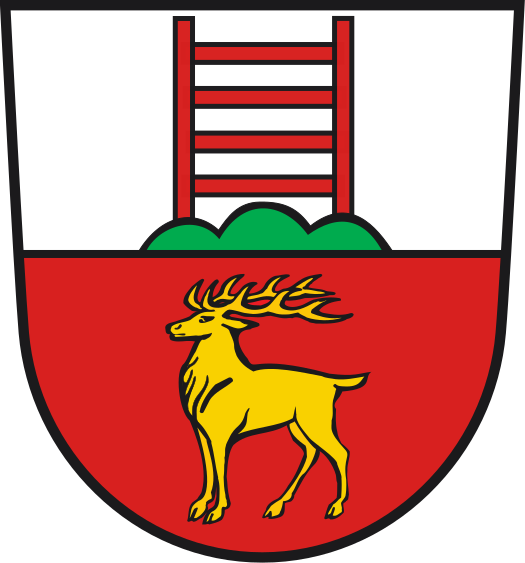 Blazon: Per fess argent issuant from a triple mount in base vert a ladder gules and of the last a stag statant or

The ladder (leiter) is a canting allusion to the first lords of Krauchenwies, the Lords of Leiterberg.

Blazon: Azure on a triple mount in base proper a stag salient or bearing in the mouth an arrow sable fletched gules and argent

The first written reference to the village dates back to 854, when Louis the German awarded the area to the diocese of Constance. 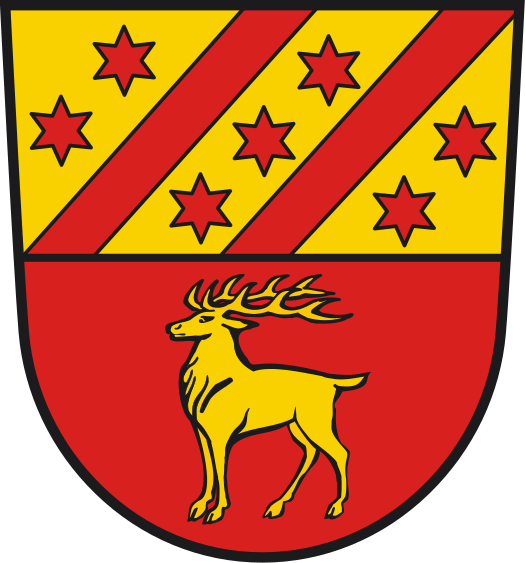 Blazon: Per fess or two bendlets sinister between seven molets of six points 2, 3, and 2 gules and of the last a stag statant of the first

The stag is almost certainly from the district arms of Sigmaringen, which has used some form of the stag or since 1483.