Presumably, the castle represents the local castle, Rochafrida Castle, dating back to the 13th century. I’m afraid I’m not sure about the keys, though. (I don’t quite know how I feel about describing keys as “affronté”, or “facing” each other, but it is the opposite of “addorsed”, and “wards to the center” seemed unnecessarily wordy. To be fair, the Spanish equivalent “afrontadas” is used in the original grant.)

Blazon: Per pale argent an archiepiscopal cross or ensigned by a galero of ten tassels vert and gules a pile of salt; all within a bordure of the first charged with the motto “FUERO DE LA VILLA DE BELINCHÓN. 1171” of the second

Setting aside the violations of the law of tincture, which no one was paying much attention to in the 1990s, I’m delighted that the original grant of these arms does give quite a bit of background on the reasons behind the choices.

The dexter half of the shield displays the regalia of the archbishops of Toledo, who ruled the city for “several centuries.” The galero is more typical of cardinals, but you’ll notice the archbishop’s galero is not red and has one fewer row of tassels – ten on each side, rather than fifteen. (I just want to point out that this depiction of the cross is almost certainly incorrect; the blazon refers specifically to a double cross, which is the archiepiscopal form; the three bars, as depicted here, are the papal cross, which, as the name implies, is only used by the Roman Catholic pope.)

The salt on the sinister side of the shield is a reference to the local salt flats – an extremely valuable resource dating back to Roman times – and the motto on the bordure cites the date the town was incorporated by Cerebruno de Poitiers, archbishop of Toledo from 1166 through 1180. 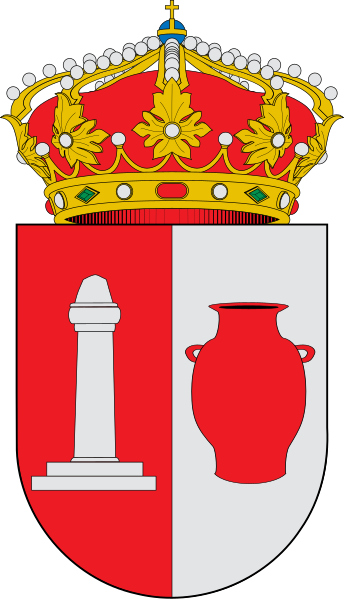 Blazon: Per pale gules a reel argent and of the last, a clay pot of the first

The exact word in the blazon for the dexter charge is rollo; I think it’s probably intended to be a spool, or the axle of a reel. My first assumption upon seeing the figure was a column, but that’s not borne out by the blazon. The clay pot may be intended to represent artifacts found in some of the local archaeological sites (dating to both the Iron Age and the Roman era), but sadly, I don’t have any further information. 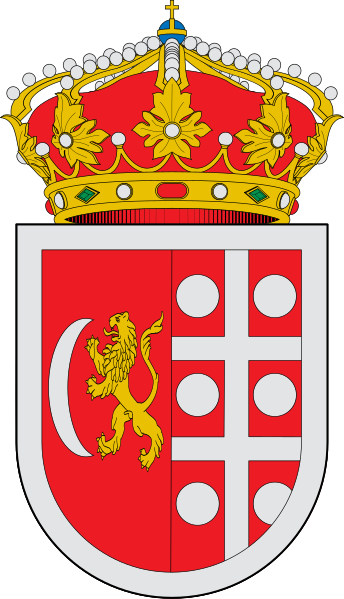 Blazon: Gules in the dexter, a crescent decrescent argent and a lion rampant or and in the sinister, a cross patriarchal throughout of the second between six plates; all within a bordure of the last

The dexter half of the arms feature the arms of the city of Huete, which had jurisdiction over Barajas de Melo until 1553. The sinister half show the former arms of the house of Melo de Portugal; Francisco Melo de Portugal held dominion over the town sometime in the mid-1600s. It’s possible the plates are an adaptation of the plates in the royal arms of Portugal, but I might be reaching on that. It does look like the Melos changed over to using a combination of Portugal and Sicily in the late 1700s, the better to emphasize their connection to royalty. 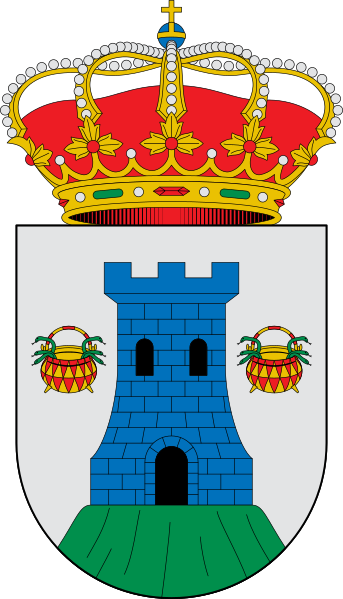 Blazon: Argent on a mount in base vert a tower azure between two cauldrons gules seven lozenges conjoined in fess or, counterchanged per fess, each containing six serpents facing the exterior of the second

A lovely set of canting arms (“atalaya” meaning “watchtower” in Spanish) featuring the infamous (to me) snake cauldrons of the Guzmans! Yes, that is an absurdly long way to describe the cauldrons’ patterns, but Spanish blazon has the much more convenient term “triangulares”, and English blazon does not. I could not figure out a way to translate it that sounded good to my ears, so I went with what I knew. 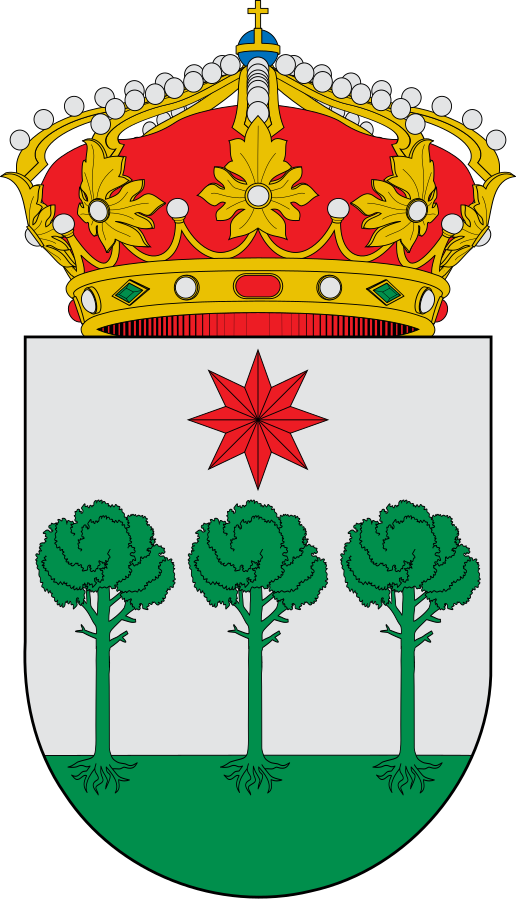