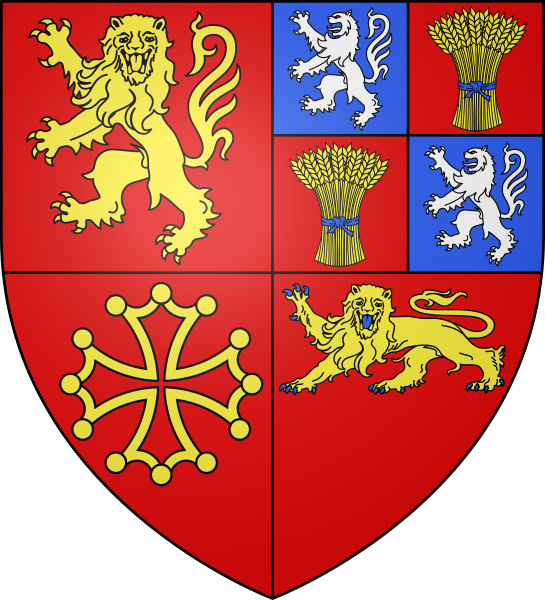 (The bull is sometimes, as here, depicted as rampant, but the blazon specifies counter-rampant.) The bull was evidently an ancient symbol of the Samnite people who lived in the region before being conquered by the nascent Roman Empire. It seems to have played an important part in the ver sanctum, or spring rites. In recognition of this history, the province adopted the bull as a heraldic symbol in 1871, with the current grant being established in 1938.

We looked at the arms Robert Louis designed for Tarn last week, but I think it’s also worth bringing these up. These arms were depicted in an 1854 atlas of the (then) 86 departments of France, elaborately illustrated by Victor Levasseur. Unfortunately, I am unable to access a physical copy of the atlas, but the digital copies I’ve found match the depiction here. (As far as I can tell, anyway – the arms are sadly, printed directly in the gutter.)

Blazon: Per fess gules and argent, in chief a marquis crown proper

There is some ambiguous evidence that these arms might have been used before the seventeenth century, but that is unfortunately far from certain. The first record of this blazon dates to 1601, and the arms seem to have been in fairly consistent use until they were formally granted in 1938. The crown might represent the kingship of Roger II of Sicily, who united the Norman conquests in Italy. 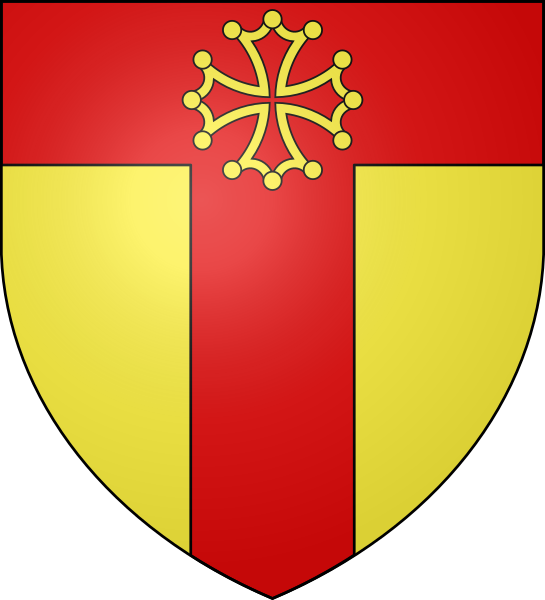 Blazon: Or on a chief-pale gules a cross of Toulouse of the field

The department of Tarn doesn’t actually have an official coat of arms, but the prolific heraldic artist Robert Louis designed one for them (among his many, many arms designed for French departments and regions). The main charge is described as a “chef-pal” in the blazon; I’ve translated this directly into English, since it doesn’t seem there is a better way to convey this form. I’ll admit to being a bit skeptical that it’s found in French heraldry, either. Part of me thinks that possibly Louis made this up so the shield could have a T for Tarn on it.

Blazon: Azure two cornucopias in saltire ensigned by a crown or, the dexter filled with wheat and the sinister with fruit all proper

While I cannot find any specific rationale behind these arms, it’s highly plausible that the dual cornucopia is a reference to the remarkable fertility of the region; it was part of the area called “Campania felix” in the Roman era, or “fertile countryside.”

These are obviously the arms of Aragon, which probably ended up associated with Pyrénées-Orientales via the county of Roussillon. Given the significant influence that Aragon had over what is now southern France, it’s not surprising that their arms kind of end up all over this region. However, these are definitely not official arms, and their connection with the department is tenuous.

These are fairly new arms; in 2010, Salerno switched over to the “Amalfi” cross (as it is described in the official decree) from the previous arms, which featured a winged compass. Amalfi may have used the cross long before the Knights Hospitaller; the Duchy of Malfi apparently minted coins with a similar design in the eleventh century. Of course, there are plenty of eightfold symbolisms attached to the cross; the grant cites the Beatitudes as the origin of the eight points. Personally, I think the Maltese cross is a fairly natural evolution of the cross moline, and probably doesn’t have any greater theological meaning.