Blazon: Per pale azure a castle triple-towered or windowed gules and of the second, a crescent decrescent argent and a lion rampant of the second

The representation of the lion and the crescent moon don’t seem consistent; some depictions, as here, have the lion almost within the curve of the moon, and in others, it looks more like the lion is supporting the moon with its front paws. The dexter half of the shield is apparently a canting element, since alcázar is Spanish for a fortified castle. The sinister half replicates the arms of Huete, to which the town previously belonged. Allegedly, the lion represents the victory of the Christians over the Muslims (represented by the crescent) in the Reconquista, but I don’t have a good source for that theory. 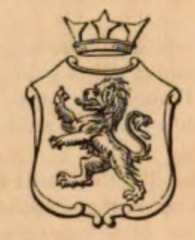 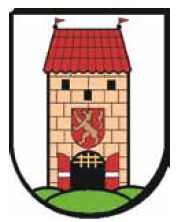 Blazon: Argent on a triple mount in base vert a stone tower proper, roofed gules, masoned sable, portcullis or, ported of the second a fess of the third, and charged with an escutcheon of the second a lion rampant or

Even the official town website doesn’t include anything about why these arms are the way they are. The escutcheon on the tower feels like it should belong to a specific family or region, but I can’t find any evidence of who it could be, and “gules a lion rampant or” is general enough that it might not refer to anyone or anything in particular. The tower bears a superficial resemblance to Ebenfurth Castle; it seems plausible that it’s a representation of that building. I’m very interested, but also puzzled, by the Austrian fess on the tower doors; I have no idea where that comes from!

Blazon: Azure the sea proper in base surmounted by a rocky mountain also in base, thereon a winged lion passant and nimbed, the dexter forepaw resting on an open book all proper emblazoned with PAX TIBI MARCE EVANGELISTA MEUS sable

The Lion of St. Mark has been a symbol of Venice and the surrounding area going back to at least 1261, possibly earlier. The legend goes that St. Mark was shipwrecked in the Venetian lagoons when an angel in the form of a winged lion appeared and proclaimed “Pax tibi Marce, evangelista meus. Hic requiescet corpus tuum.” (Peace to you, Mark, my evangelist. Your body will rest here.) Later authorities claimed the lion was a symbol of majesty, the book stood for wisdom, and the halo for piety, but this sounds very much like the sort of post hoc rationalization that was common in later centuries.

Blazon: Per quarterly I gules a chain in saltire, cross, and orle or, charged with a center point vert (Navarre/Basse-Navarre); II or two cows passant in pale gules, armed, collared, and belled azure (Béarn); III per pale or a lion rampant bearing a baton gules and azure a fleur-de-lis or (Labourd); IV gules a lion rampant or (Soule)

I’m not entirely clear on whether this is an official coat of arms or not, but let’s be honest, that hasn’t stopped me before. It consists of four regional arms; Béarn was a former province which was combined with Labourd, Basse-Navarre, and Soule in 1790 to form the department of Basses-Pyrénées, renamed to Pyrénées-Atlantiques in 1969. The Béarn arms date back to pre-1290, and were either a reference to a legend of a count of Foix carrying the body of St. Volusianus on a cart pulled by two cows, or (more plausibly) a canting reference to the Vaccaei, whose descendants settled the region. I don’t want to dig too much into the arms of Navarre, since I expect I’ll revisit them in the near future, and, unfortunately, I don’t have much information on the other two quarters.

So, I’m not really sure what’s going on with this. There is a well-documented Robert FitzRoger of Clavering Castle, son of Roger FitzJohn of Warkworth Castle, who lived at precisely the same time as the Dering Roll was compiled. However, he is also cited in the Falkirk Roll, compiled in 1298… with completely different arms (per quarterly or and gules, a bend sable). The Burkes cite the latter arms in their A genealogical and heraldic history of the commoners of Great Britain and Ireland enjoying territorial possessions or high official rank; but uninvested with heritable honours, but I’m not sure how much credence to give that. Either one of those rolls is wrong, or the Dering Roll is representing another person with the same name who has somehow escaped all other historical notice. The quarterly or and gules a bend sable had to have been used fairly early on, since it seems to have carried over into other cadet branches of the family with some modifications. I don’t have a good idea of where the lion could have come from; my best guess is the Earls of Dunbar, the family of Robert’s mother Isabel, but I’m not very confident in that. They bore gules a lion rampant argent, which means the tinctures would have been pretty mangled. Oddly, it doesn’t seem like this specific blazon is used by any other family. I think I’ll just have to chalk this up to the inconsistent documentation of the thirteenth century.