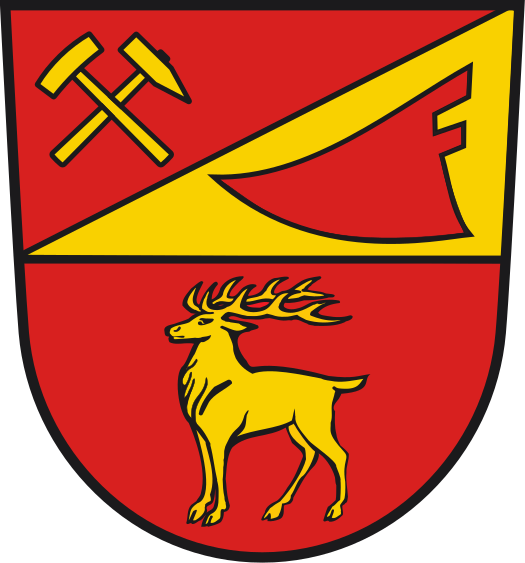 Blazon: Per fess I per bend sinister gules two hammers in saltire or and of the last a plowshare of the first, II of the first a stag statant of the second

The stag is drawn from the arms of the county that shares its name with the village, while the hammers represent the local steelworks and the plowshare stands for agriculture. 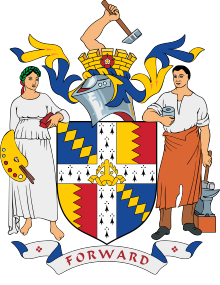 Blazon: Per fess wavy argent and azure, in chief five pairs of hammers in saltire 3 and 2 sable

The base half of the shield represents the Drava river, and the hammers represent the centuries-long importance of mining in the region.

Blazon: Or a bend sinister wavy between in chief a fleur-de-lis and in base two hammers in saltire azure

The bend sinister symbolizes the Gail river, and the hammers allude to the mining industry. The fleur-de-lis is borrowed from the arms of the house of Porcia, an Italian noble family who later served the Habsburgs. Legend has it an ancestor of the family went to France to seek permission to bear the fleur-de-lis in their arms, which was granted.

The charges refer to common industries in the region. The hammers stand for mining (primarily silver and iron), and the trees stand for forestry. The colors of the field come from the national arms of Austria.

Blazon: Per bend sinister wavy azure or and vert, in chief three stalks of wheat palewise in fess, in base a hammer palewise surmounted by two oak leaves in saltire counterchanged

The bend sinister refers to the river Lafnitz, while the other tinctures are drawn from the coats of arms of Styria (vert and argent) and Burgenland (or and gules). The rest of the charges are symbols of local industries: agriculture and forestry.

Blazon: Argent two hammers in saltire within a cog wheel gules, in base an oak leaf and a beech leaf in saltire vert, a chief per fess nebuly of the field and the last

Presumably, the hammers and cog wheel refer to the town’s centuries-long history of mining iron ore.