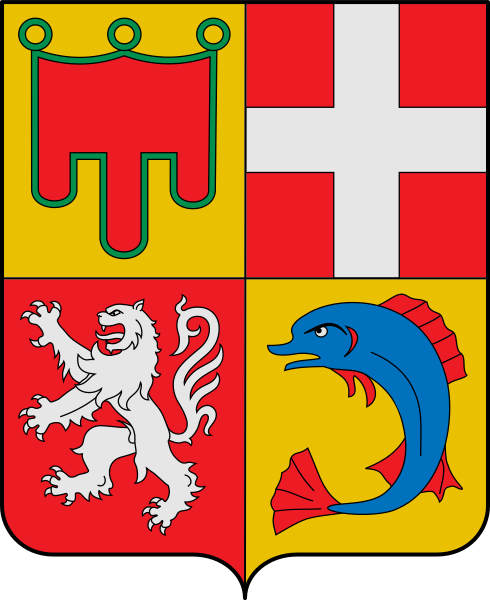 The gonfanon of Auvergne has been in use since at least the 12th century, as evidenced by several seals. There’s a story that it’s taken from the banner that Eustace III, Count of Boulogne (brother of Godfrey of Bouillon and Baldwin of Boulogne) took on the First Crusade, but it’s more likely derived from the banner of the abbey of Saint Géraud d’Aurillac.

This is (as the name implies) combined with the coats of arms featured in the former flag used by Rhône-Alpes. The Lyonnais coat of arms is derived from the arms of the city of Lyon, which is pretty obviously a canting charge; I’m skeptical of the claims that it’s derived from the arms of Marc Antony, allegedly a patron of the city – not least because the Romans didn’t have coats of arms in the same way that we think of them. By contrast, it seems like Dauphiné got its name from the arms, rather than the other way around; it was formerly ruled by the Counts of Albon, who have borne a dolphin since the 1100s. (The charge does seem to derive from a possible relative of the family named “Dolfin.”) And, of course, the Savoy arms have been that since the Crusades; they’re probably an inversion of the red cross that all crusaders wore as a symbol of their mission.

The designer of these arms says something here that I really like, which is that a coat of arms is “a way of anchoring an institution in history.” I think that’s a great way of thinking about heraldry in both the ancient and modern eras: as a way of understanding where a particular nation/region/family/organization stands in relation to the larger tide of history. What are its allegiances, its inheritances, its legacies? What has it chosen to keep, and what has it chosen to discard? What’s the story the arms convey? I hope to keep these questions in mind as I continue to research and practice this weird, wonderful little discipline.

It looks like Hauts-de-France hasn’t been officially granted arms yet, either, which wraps up the new administrative regions. Next week, I’ll start revisiting some old friends.

Blazon: Or a gonfanon gules; on top of the shield two arms in saltire proper, clad in puffed sleeves gules slashed or, each holding an antler sable

The source of the gonfanon is the arms of the principal branch of the Counts Palatine of Tübingen, who were based in the area in the early twelfth century. I don’t generally make a practice of describing shield ornamentations that don’t fall into the standard crest/supporters/mantling format, but these do appear to be explicitly part of the official blazon. They were evidently granted by Duke Ulrich of Württemberg (hence the antlers) for the town’s loyalty during the Poor Conrad uprising.

Blazon: Per quarterly I and IV or a lion rampant gules armed, langued, and crowned azure (Albert), II and III azure two wolves combatant argent (Ségur), overall in the fess point an escutcheon gules a mace palewise or garnished sable, on a chief argent a gonfanon of the field (Sarrats)

Blazon: Gules a gonfanon or

Ferne specifies that this charge is “good in french Armory” and blazons it as a “banner of three pennons” instead.

Blazon: Per quarterly; I and IV azure semé de lis or, a tower argent (de la Tour); II or three torteaux (Courtenay); III bendy gules and or (Turenne); overall in the fess point an escutcheon per pale or a gonfanon gules fringed and ringed vert (Auvergne) and gules a fess argent (Austria)

Blazon: Per quarterly; I and IV azure semé de lis or, a tower argent (de la Tour); II or three torteaux (Courtenay); III bendy gules and or (Turenne); overall in the fess point an escutcheon per pale or a gonfanon gules fringed and ringed vert (Auvergne) and gules a fess argent (Austria)

Blazon: Or a gonfanon gules fringed and ringed vert