There is a Hirrlingen family dating back to 1000, while the place appears to be younger; its first mention was in 1275, at which point the main line of Hirrlingens had died out. I don’t know what the Hirrlingen family arms were; it doesn’t seem like any depictions of them have survived. It looks like the Hohenbergs (per fess argent and gules) took over in the mid-thirteenth century, so it’s possible that the tinctures are drawn from their arms – but argent and gules is also an extremely common combination, so it’s equally possible that it’s completely irrelevant.

Blazon: Azure a lion rampant or, armed and langued gules; in the dexter chief a Maltese cross argent

I’m pretty confident in saying that the Maltese cross derives from the Knights Hospitaller, given their long association with the town. The Knights Hospitaller owned the town outright from 1281 through 1805, though they had a presence in the area dating back to 1258. I’m not sure about the lion, though.

Blazon: Gules a beehive with bees volant or

I don’t have much information on these arms, but it does seem like there are some wild beehives in the town’s arboretum. (I’m not quite sure what a “wild bee place” or “Wildbienenlage” refers to, and I’d welcome any further input on that. My German isn’t very good.) They do seem very proud of the beehive’s traditional symbolism – diligence, cooperation, and hard work. While I know coats of arms aren’t typically granted or adopted due to the more esoteric symbolism, I can’t prove these weren’t, and I can’t bring myself to be the wet blanket.

Blazon: Argent a lion salient or langued gules on a base sable

It’s really an open question whether these are official arms or not; they don’t seem to have any tinctures specified, and I have no idea how long they’ve been in use, but look at them! That has got to be one of the weirdest lions I’ve ever seen, and I have seen some weird lions. It’s not just this depiction, either. The pose! The head! The tongue! It’s glorious, and I needed it on my blog. Thank you for sharing this absolute fucking horror with me.

(Right, I should also say that the family who originally ruled the area from the 1300s through 1695, the Megenzers, had some really beautiful and unique arms that I’m not entirely sure how to blazon – but you’ve got to respect a town that says no, never mind that, we’re going with that goddamn lion.) 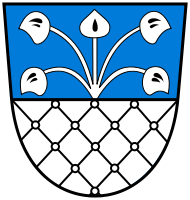 Blazon: Per fess azure issuant from the partition line five branches with heart-shaped leaved conjoined in base argent and of the last a lattice sable

I wouldn’t be surprised if these arms were much older than I could verify, since apparently Ergenzingen was awarded the right to hold a market in 1789. I opted to blazon the base half as a lattice rather than fretty since that seemed to be the best translation of the word in German (Rautengitter), and it lacks the characteristic interweaving of frets. I went back and forth on whether to mention the small dots or roundels on the joints, but they don’t seem to be consistent across depictions.