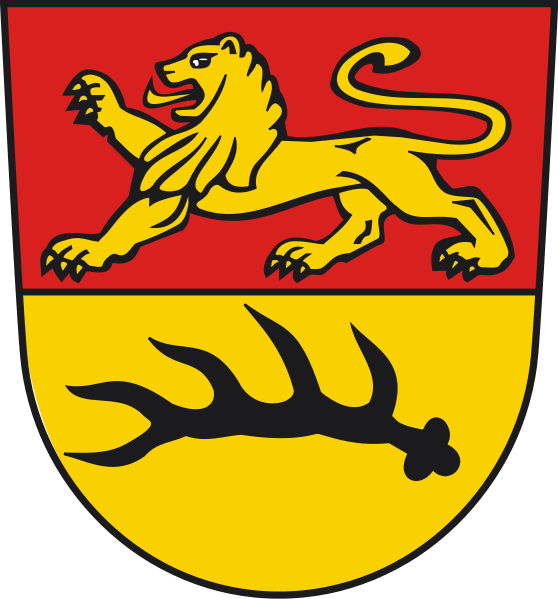 Blazon: Or a lime tree eradicated vert, in base a plowshare azure

Unfortunately, I don’t have any information on these arms, but it doesn’t appear that they took any influence from the various noble families who ruled the land (Validlingen, Wernau, Württemberg, etc.) I’d suspect the arms are a reference to local agriculture, but I don’t have anything to back that up.

Blazon: Sable a chevron on, in base water argent

The chevron is evidently from the arms of the Ehingen family, who built a castle in the region in 1280 (and presumably owned the land – although the Zollerns may have disagreed with that). I assume the water is a canting element, referring to the Bad (“bath”) in the town’s name and also to its mineral springs, long believed to have healing properties.

Blazon: Per fess argent a leopard passant azure armed and langued gules, maned of the field and of the second, a plough of the first

I feel pretty safe saying that the leopard* is drawn from the arms of the noble family of Schenk von Stauffenberg, given that the town belonged to a branch of the family (Schenk von Andeck) from probably the late thirteenth century until they sold it to the von Stettens in 1433. Presumably the plough is a nod to the agricultural nature of the region, although I don’t know this for certain.

*Yes, that is in fact a leopard. I had to check the blazon. The hair around its face (I’m calling it a mane because I don’t know what else to say) makes me think it was potentially at one point intended to be a lion, but I’m afraid I don’t know for sure. Whatever it is, it’s going in my personal hall of fame of terrible heraldic art.

I don’t have an exact date for this coat, but it must’ve been in use when it was incorporated in 1973, since Starzach specifically drew the roses in its coat of arms from Sulzau. I’m guessing at the 1800s date based on some documentation of the nearby Sulzau Castle, which at one point was the seat of the lords of Sulzau. Sadly, I can’t find any additional information on possible local nobles, but it is at least possible that they bore the above arms.

Blazon: Per pale argent a stump eradicated vert and azure a sinister wing displayed of the first

I’m assuming that the sinister half of the arms, at least, are taken from the Melchingen arms; while I can’t find any solid evidence that they ever owned the area, their arms are literally identical to the sinister half of the arms, and they were a prominent local family. I’m not entirely clear on when they were granted; in 1824, Stockach was part of Reutlingen, with no arms cited, but upon the town’s incorporation into Gomaringen, it seems they used the arms featured here.

Blazon: Gules a fountain spouting water and crowned with a dolphin bowed embowed, head in base argent

In 1900, Seebronn was apparently using a rooster in their arms, but by the time 1972 rolled around and the town was incorporated into Rottenburg am Neckar, the fountain was clearly pretty well-established. Unsurprisingly, it does appear to be a representation of an actual fountain in the town center.