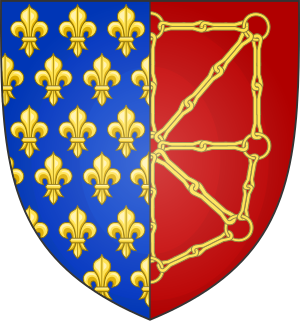 Blazon: Azure semé de lis or (France ancien) dimidiated with gules a chain in saltire, cross, and orle or, charged in the center with a pomme (Navarre)

I do want to briefly talk about some variations of the French national arms before we revisit the various regions and major cities. I wanted to touch on this particular coat not just because Louis X has a really excellent epithet (Louis the Stubborn!), but also because it’s a not-very-common example of dimidiation. Dimidiation is often used in the same circumstances as impalement or quartering – in this case, Louis inherited the kingdom of Navarre from his mother in 1305, and that of France from his father in 1314. The distinction there is that while both impalement and quartering keep both sets of original arms intact, dimidiation literally cuts them in half and reforms them into a single coat. Sometimes, like in this example, it works pretty well, and both arms are still easily identifiable. More often, though, dimidiation yields confusing or just plain weird results, so it’s understandable why it’s not used very often. (I’ve seen theories that badly planned dimidiation is where we get griffins, but they’re blatantly wrong; griffins predate heraldry by a good couple of millennia.)

Blazon: Azure a cross gyronny argent dimidiated with gules a Sester* of the second

Motto: Rex et nostra jura (The King and our rights)

The device of the lions dimidiated with herrings is obviously related to the famously peculiar arms of Cinqe Ports, though it is not clear whether this is an intentional homage or another case of dimidiation having an unexpected result.

From Inquiries into the Origin and Process of the Science of Heraldry in England by James Dallaway, p445

The arms on the dexter side of the shield are those of de Fortibus, gules a cross patonce vair, and those on the sinister are or a lion rampant azure, the paternal arms of his wife, Isabella de Fortibus, nee Redvers. His arms are dimidiated while hers are impaled.

An ample field of heraldic invention was now [during the reign of Richard II] expanded; for the escocheon, no longer singly charged with the hereditary bearing, admitted those of the wife by dimidiation or impalement, and of heirs general by quartering.

-From Inquiries into the Origin and Process of the Science of Heraldry in England by James Dalloway, p116

Blazon: Or a lion rampant gules, armed and crowned of the field, dimidiated with argent a cross of the second

Blazon: Or a double-headed eagle displayed sable, armed and langued gules, in the dexter claw an antler azure dimidiated with of the last a fleur-de-lis argent