Blazon: Argent on a torteau a cross of Toulouse or

Another Robert Louis creation! I like the straightforward simplicity of combining the cross of Toulouse of Occitanie and the torteau of the lords of Montpellier (the department’s prefecture). I should note that, however visually and historically appealing they may be, these arms, like most of Louis’ designs, are not official. 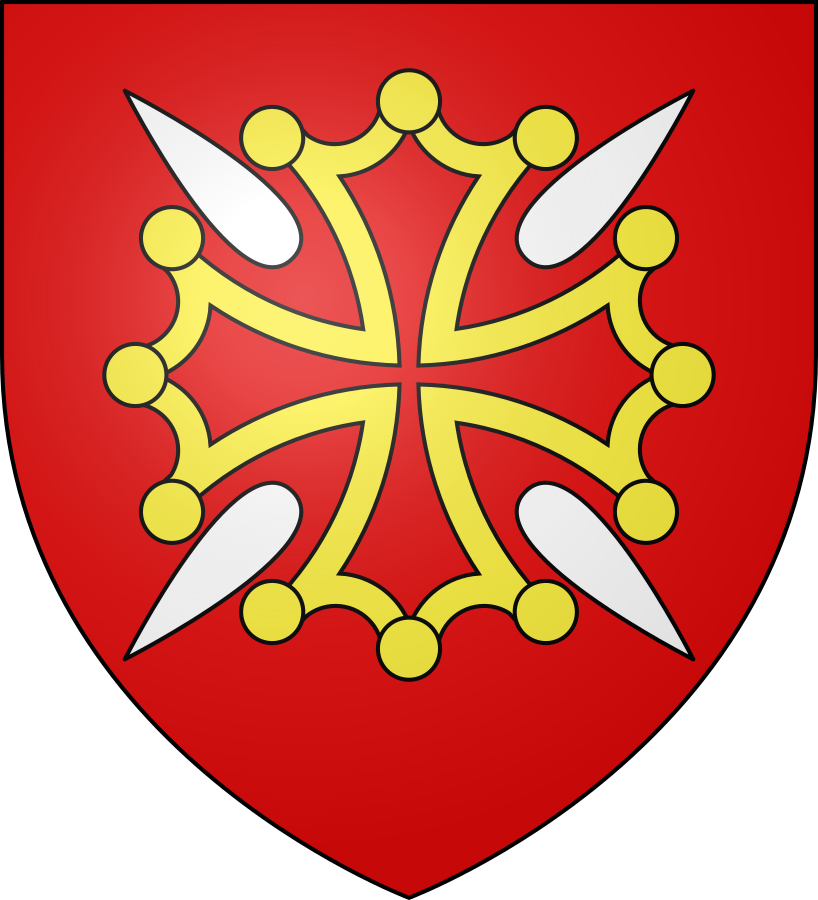 Blazon: Gules a cross of Toulouse or between four otelles in saltire argent

The combination is striking but straightforward – the regional cross of Toulouse centered within the four otelles of Comminges. The otelle is a weird charge – it doesn’t show up anywhere besides in the arms of Comminges. Comminges is also cited as a cross paté, so it’s possible that it’s a result of a poorly detailed depiction of the arms, or a confusion between the figure and the ground.

Blazon: Gules a cross of Toulouse or within a bordure embattled argent

This is a tricky one; it doesn’t seem to be a Robert Louis coat, nor does it appear to be official, so I really don’t have a good way of dating it. The cross of Toulouse, of course, is the historical and current symbol of Occitanie, the department’s administrative region. (There are a lot of crosses of Toulouse in Southern France.) One of my favorite sources speculates that the bordure embattled could be a reference to the walls of Carcassonne, the capital of the department. I’m not sure how credible this is; if it were a Robert Louis design, or even a twentieth-century one, this could be a fairly plausible explanation. But… Aude is one of the departments created in 1790, during the administrative reforms of the French Revolution. If the arms really do go back that far, I’d be somewhat more skeptical of the symbolic rationale. 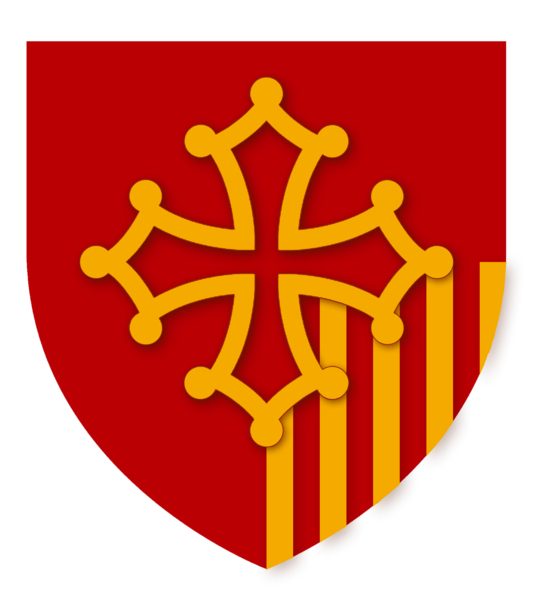 Blazon: Gules a cross of Toulouse or; the fourth quarter of the last, four palets of the first

This blazon was formerly, if unofficially, used by Languedoc-Roussillon, but the combination was obvious, given that Midi-Pyrénées used gules a cross of Toulouse or. I accept that I am slightly biased by both the shading in this particular depiction (definitely not a part of traditional blazon, but it sure does add a nice touch) and my fond memories of the region, but damn. This is Good. You’ve got your cross of Toulouse, and your palets from Aragon by way of Catalonia, combined into something that’s modern, visually distinctive, and obviously derived from something much older.

(NB: Yes, I know I skipped Grand Est. They don’t formally have arms yet, but let me express my hope that they’re using this time to design something more visually appealing than the proposed flag, holy shit. That is too many bends, y’all. Pick one.)

Blazon: Per quarterly I gules a cross clechée, voided, and pommettée of twelve or (Toulouse), II argent four palets gules (Sévérac), III gules a harp or (Arpajon), IV azure between three fleurs-de-lis or a bendlet couped gules (Bourbon-Roussillon); overall in the fess point an escutcheon gules a cross argent*
*This rendering seems to be slightly inaccurate; Bourbon-Roussillon is usually depicted with a bendlet sinister raguly gules debruising the fleurs-de-lis, and the cross in the escutcheon should probably be a Maltese cross, since Arpajon was a Knight of Malta and had no connection to Savoy.

Arms of Villefranche-de-Rouergue, France Blazon: Gules, in base the sea argent fimbriated azure, a bridge double-towered of the second, in chief a cross clechée, voided, and pommettée of twelve or; on a chief of the third three fleurs-de-lis of the fourth