Blazon: Per fess argent a cross of Calatrava gules and of the last, thirteen bezants in pale 4, 5, and 4.

Okay, first of all, about the eyes: they are not actual eyes. They are the sources of the Guadiana River, which are located near the town. Those get their name from a mistranslation from the Arabic: ﻋﻴﻦ can evidently mean both “eye” and “spring,” and whoever did the translation to Spanish picked the wrong one.

The cross of Calatrava is probably due to the fact that the town was granted to the Order of Calatrava in 1466. That was also the same year that the Grand Master of the Order, Pedro Giron, died suddenly in Villarrubia on his way to marry Princess Isabella – yes, that Princess Isabella, the one who ended up marrying Ferdinand II of Aragon and becoming Isabella I. Maybe it was a very odd way of expressing condolences? The bezants are attributed to the Counts of Salinas, who purchased the town in probably the early 16th century. I did find a record of at least one family with that surname using roundels in a similar arrangement, so it’s not completely out of the question.

Blazon: Per fess azure three fleurs-de-lis or within a bordure gules and argent a cross of Calatrava gules

The arms in the chief half of the shield are those of Anjou in honor of Charles III of Spain – presumably the titular “Carlos.” His father, Philip V, was previously Duke of Anjou before he ascended to the Spanish throne in 1700. These arms are sometimes cited as “Bourbon,” but they are specific to the Spanish Bourbons. Azure, three fleurs-de-lis or (without the bordure or any other additional charges) are the arms of the senior (French) branch of the House of Bourbon, which fell from power when Charles X abdicated in 1830.

Blazon: Or a stone column* proper on a base vert, in chief a cross of Calatrava gules

Obviously, these are partly canting arms, but I’m more intrigued by the stone column. One of the sources I found implies that these arms are significantly older and, moreover, that there was actually a column in the town square in the 16th and 17th centuries. It seems the column was demolished sometime before 1639, but I have no idea why. It also seems that the original use of these arms dates back to around the same time, and putting a local landmark on municipal arms is an extremely common practice.

*I know, but I’m trying very hard to be mature about it, and the… distinctive shape seems to be unique to this particular depiction

Blazon: Per pale argent a cross of Calatrava gules and vert two bars wavy of the first, in chief a beehive between two bees displayed and in base a sheep statant or

As you might expect from the charges, both agriculture and beekeeping are extremely important to the municipality, all the way back to its founding. The very first settlers were apparently beekeepers and ranchers, so while it might not be particularly exciting, I can’t really fault them for using those as charges. (At this point, I’m more surprised I can’t find anything that claims the bars wavy symbolize two rivers in the area, though I definitely wouldn’t rule it out.) 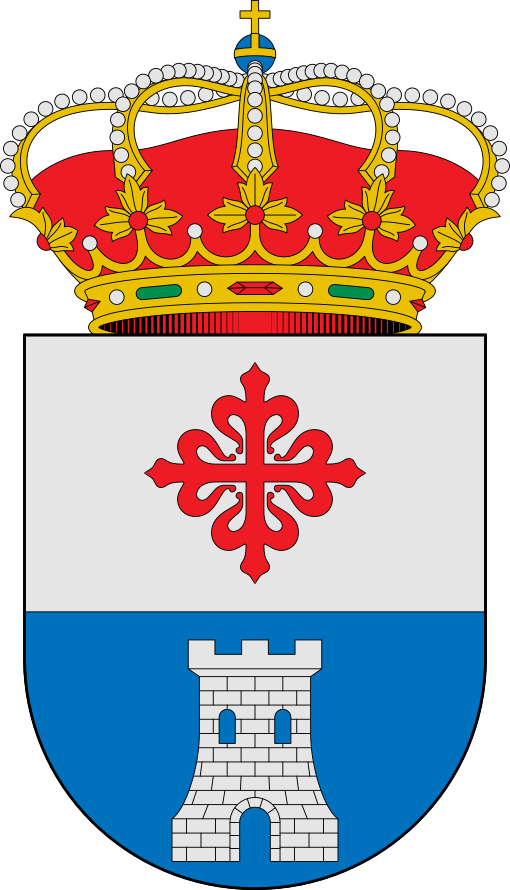 Blazon: Per fess argent a cross of Calatrava gules and azure a tower of the first

Whatever kind of shade some ancient writers throw on canting arms, I love them. It’s like all the best parts of puns and linguistics put together! It’s especially satisfying when every element of the arms matches a component of the name in question. The “de Calatrava” clearly corresponds to the cross of Calatrava, from the military order that occupied much of the south of Spain during Reconquista. The first part of the name is covered in the base half of the arms – “torre alba” being a rather poetic way of saying “white tower” in Spanish. It’s possible the white tower in question is a direct reference to the town’s old fortress (which had a church built on it more than 500 years ago), but that’s pure speculation.

Blazon: Per fess argent a cross of Calatrava gules and or a grill fesswise sable, in base a palm branch embowed proper

The grill is a symbol of St. Lawrence, the patron saint of the town, who was roasted to death. The first records of the town date back to 1588, when a group of peasants told King Felipe II that they were unable to attend Mass because they lived too far from a church.