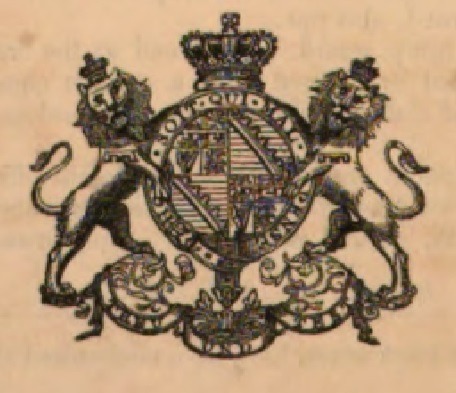 The Burkes give the blazon as follows:

“Quarterly, first and fourth, the Royal Arms, differenced by a label of three points, on the center point a cross gules; second and third, barry of ten, sable and argent, a cross treflé vert, for Saxony.

Supporters – Two lions rampant or, crowned proper each charged on the shoulder with a label as in the arms.”

Okay, first off, because I can’t not point it out: the charge of Saxony is not, and never has been a cross treflé (or botony, as I typically prefer.) It’s a ducal coronet (embowed or not might be a point of dispute), but it’s…. definitely not a cross. The arms of Saxony aren’t hard to find, and this is a second edition of the text, and this particular slip-up isn’t mentioned in the errata, AND they blazon it correctly (or anyway, less wrongly) on literally the same page, so I’m gonna have to blame shitty editing here. Like, come on, that is demonstrably not a cross. The artist got it right, at least.

Also, the label is worth a word. English royalty tend to use labels with differences to distinguish between the inevitably numerous heirs to the throne. We’ll see more of this a bit later on, since the Burkes have included depictions of the labels for many of the other members of the royal family. You will probably notice that Albert has a label with a difference (the cross gules) instead of the undifferentiated label of three points. This is due to the fact that, as Prince Consort, he wasn’t actually first in line to the throne. That honor goes to his and Victoria’s eldest son, Albert Edward, whom we’ll look at next week.

Our Viscount may not wear any coronet (for he is called noble, but he may not be said princely).

Blazon: Azure a lion rampant within an orle of garbs or

Crest: On a wreath of the colors from a coronet or a cock’s head gules combed and wattled of the first, all between two roses of the second barbed and seeded proper

Crest: On a wreath of the colors a wyvern without legs argent wounded gules wings elevated and displayed ermine

Supporters: Two lions reguardant gules gorged with a ducal coronet suspended therefrom by a chain or a cinquefoil as in the arms

Blazon: Or on a chevron azure three coronets each composed of crosses paté and fleurs-de-lis of the field; on a chief sable a garb between two pairs of windmill sails also of the field

Crest: On a wreath of the colors a demi-lion rampant or holding in the forepaws a wool-pack proper charged with a ram couchant or*

Supporters: Two mermaids proper crined and finned or upon a compartment of waves barry wavy azure and argent**

*The blazon specifies that the ram should be or, though the depiction here seems to be argent.

**Compartments are generally not described in the blazon, but this seems to be an exception.

Blazon: Argent on a cross engrailed sable a lion’s head caboshed between four cross crosslets or

Crest: Out of a coronet of fleurs-de-lis or a demi-stag at gaze proper charged on the shoulder with a fountain and holding in the mouth a seaxe argent pommel and hilt or

Blazon: Per fess or and sable, in chief siz palets azure, in base five palets of the first

Crest: Within a mural crown or an ancient three-masted ship in full sail or, the center sail of the arms

Supporters: Two Bengal tigers rampant proper gorged with a coronet and resting the interior hindleg on a garb fesswise or

Blazon: Per quarterly I and IV per pale gules a horse salient to the sinister argent (Westphalia) and barry of ten sable and or a ducal coronet in bend vert (Saxony), enté en pointe argent three crampets 1 and 2 gules (Angrie); II argent biletté and a lion rampant sable, armed and langued gules (Chablais); III sable a lion rampant argent, armed and langued gules (Aoste); overall in the fess point an escutcheon gules a cross argent (Savoy)

Blazon: Per quarterly I and IV gules an eagle displayed argent, armed and crowned or (Poland); II and III, gules a knight upon a horse salient, bearing in his dexter arm a sword fesswise argent and on his sinister an escutcheon azure a cross patriarchal or (Lithuania); overall in the fess point an escutcheon per pale the first per fess argent and sable, two swords in saltire, points towards the chief gules (Arch-Marshal of the Holy Roman Empire) and barry of ten sable and or, a ducal coronet in bend vert (Saxony)