There’s not a whole lot of information on Norman d’Arcy, who has got to be the third or fourth Norman in that family. Probably born around 1220 in Nocton, where his father was the lord, he died after a fairly uneventful (or at least unrecorded) life around 1314. He was the fourth son, which may make you wonder why the arms aren’t differenced, but it looks like he was the oldest (and maybe the only) son left alive when the Dering Roll was compiled.

(And yes, Austenites, this could conceivably be *the* Darcy’s coat of arms.)

Today marks the day that the Romanian Kingdom incorporated the territories of Bessarabia, Bukovina, Transylvania, Banat, Crișana and Maramureș with the Kingdom of Romania in 1918. Technically, Bessarabia and Bukovina had been incorporated earlier that year, but December 1st brought the most new territory to the crown. I’m sure you won’t be surprised to know that many of those territories are represented in the arms – and there are a lot of them, so let’s get started!

Okay. Obviously, there is a lot going on here, but the major motif (repeated twice) is the eagle or. The eagle charge is, unsurprisingly, derived from the Romans and also featured in the regional arms of Wallachia, although there it was sable (and thus somewhat closer to the Holy Roman Empire’s eagle). Wallachia’s eagle also has the cross in its beak – and exactly what that cross is is a whole separate conversation. I’ve gone off the depiction in the larger eagle, but it also shows up as a simple passion cross, a cross paté, etc. It’s described in some places as an “Orthodox cross,” but that phrasing doesn’t have any real heraldic meaning, and should not be confused with the double-barred cross patriarchal of the Russian Orthodox church. The eagle, cross, sun, and moon have been consistent Wallachian symbology since at least the Middle Ages. As one of the two principalities in the United Principalities that later became Romania in 1866, I suppose it’s only fair that Wallachia get double representation, though I suspect the Roman associations are really why it’s the larger background charge.

In the next quarter of the smaller escutcheon are the arms of Moldova (or, formerly, Moldavia), which have also remained pretty much exactly the same since it was a voivodeship. It looks like a bull’s head, and I was perfectly ready to blazon it as a bull’s head, but all the sources I found were very insistent about calling it an aurochs instead. The aurochs and the star have their own little legend, which holds that Dragoș, the first voivode of Moldavia, chased a bull marked with a star from his native Maramureș all the way to a river, where he killed it with the help of his hunting dog, Molda. Molda’s accomplishment resulted in both the river and later the principality receiving her name.

Banat and Oltenia appear to come as a unit, and certainly their symbols are very similar; Banat just used a lion, while Oltenia’s lion bore a sabre and appeared over Trajan’s Bridge. I guess it makes sense to combine those two, and I really like Oltenia’s arms, but I do feel a bit bad for Banat. I also just want to mention Dobruja, briefly, before we get into Transylvania; I don’t think there’s any deeper meaning behind the dolphins besides “this part’s next to the sea.”

Okay, Transylvania! Which I have covered on this blog before, but not in detail. They were granted in 1765 by the Holy Roman Empress Maria Theresa. The towers, sun, and moon are all pretty straightforward; the towers represent the ethnic Saxons, and the sun and moon, ancient grave symbols, represent the Székelys. The eagle is less clear; there are a number of very, very old coats, seals, and symbols that are connected to Transylvania and feature an eagle, but it’s unclear whether these were truly heraldic. It could be a version of the Polish eagle, or it could be intended to represent the Hungarian ethnic group.

The Romanian quarters were first established in 1866, though some were swapped out for others as their territorial dominion changed. In 1948, the Soviet Union did in fact grant Romania its own emblem, and it was so terrible that the symbol of resistance to communism was the USSR Romanian flag with the emblem literally cut out. (Yes, I know there are probably many more reasons that “empty flag” was adopted besides the visual nails-on-a-chalkboard of Soviet heraldry, but I like to think that was part of it.) The overall arms were adopted in almost their present form after the fall of communism in 1992, and the steel crown was added in 2016.

Blazon: Argent a boar passant sable, armed of the field on a triple mount in base proper, in chief a cinquefoil gules

Both elements of the arms evidently derive from the Counts of Eberstein, an ancient regional family that died out in 1660. The cinquefoil was from their coat of arms (argent a cinquefoil gules seeded azure), and the boar (Eber) is a canting element on their name. 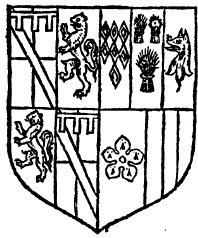 After Amicia’s brother,  Robert de Beaumont, died in 1204, his title of Earl of Leicester passed to Amicia and Simon’s son, also named Simon. However, the younger Simon lost the earldom in 1215 when King John granted it to Ranulf de Blondeville, Earl of Chester. The younger Simon had two sons – Amaury and yet another Simon. This last Simon (Amicia’s grandson) would later convince Ranulf to cede the earldom to him in 1238, though his later rebellion against the king in the Second Baron’s War would result in the return of the title to the crown from 1265 until 1267.