Blazon: Per pale azure five Doric columns, base and entablature proper and argent an eagle displayed with wings inverted, crowned sable; a chief of the second

There is astonishingly little detail on these, especially for Italian arms. I would assume that the columns in the dexter half of the shield are intended to be a depiction of the spectacular Tavole Palatine, the ruins of an ancient temple to Hera. The architectural terminology was specified in the original blazon, so I’ve chosen to preserve it. The eagle seems likely to be a visual reference to the Romans, but that’s just speculation. 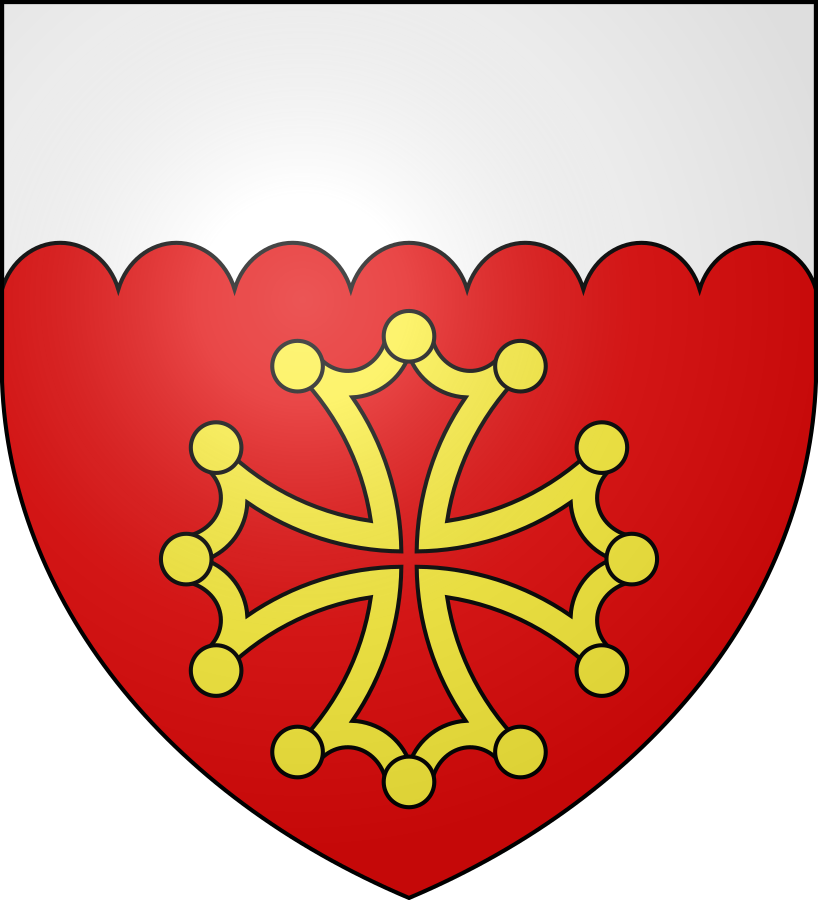 Blazon: Azure three horse-barnacles expanded or, on a chief ermine a demi-lion rampant issuant from the partition line gules

There is an actual crustacean known as the horse barnacle (Semibalanus cariosus), but 1. the depiction here doesn’t look anything like an actual barnacle and 2. they are native to the northwestern Pacific, so absolutely nowhere near England or France, where they were mostly featured in heraldry. What this charge actually depicts is a slightly more complicated question. It was possibly originally a farrier’s tool to hold horses’ muzzles closed, but it does seem to have been used as a torture method in a few instances. In one of those cases, that of Sir Henry Wyatt, the family allegedly incorporated a horse-barnacle into their arms as a symbol of their loyalty to the Tudors.

The Genevilles, or Joinvilles as they were known in France, don’t seem to have a dramatic origin story for their arms, but there are plenty of other notables in the family to make up for any shortfall. Geoffrey’s older brother Jean de Joinville wrote a very well-known chronicle of the life of Louis IX and the Seventh Crusade, commissioned by Jeanne of Navarre. Geoffrey arrived in England along with Eleanor of Provence when she came to marry Henry III, and was later involved in a number of important negotiations, including with Llewelyn ap Gruffudd. He also traveled widely, going on diplomatic missions to Paris and participating in the Eighth Crusade. (No word on whether Jean warned him that was a terrible idea.) He had an exceptionally long life for the period, so it’s perhaps not surprising that his eldest son predeceased him. Upon his death, most of the Geneville titles and lands (plus the de Lacy properties Geoffrey inherited from his wife Maud) passed to Roger Mortimer via his wife Joan de Geneville, Geoffrey’s eldest granddaughter. She did eventually get her inheritance back after Roger’s execution for treason. 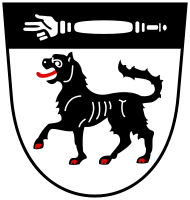 Blazon: Argent a wolf passant sable, armed and langued gules, on a chief of the second an oath staff fesswise of the field

The village of Wolfhausen changed hands several times in the early days of its existence in the twelfth century. It started out as a possession of Hohenberg, then went over to Tübingen and later Württemberg, but it doesn’t seem that any of their arms influenced these. Instead, this is a fairly straightforward case of canting arms. (Yes, that is a wolf. Yes, that is an incredibly ugly wolf, but I am trying to be polite about it.) It seems likely that the oath staff in the chief is another quasi-canting reference to the former name of the region (Stäble).

Unlike other saints I’ve covered here, like Saint Nicholas and the three balls or Saint Andrew and the saltire, Saint Valentine doesn’t appear to have any heraldic motifs associated with him (though there’s plenty of fun stuff if you dig into his legend – he’s also the patron saint of beekeepers and protects against fainting). Instead, I’ve picked a few coats of arms featuring that most Valentine’s of motifs – the heart. Fortunately for the squeamish among us, heraldic hearts are typically of the more stylized and less anatomically correct variety, but exceptions do exist.

The best-known heraldic heart (that I’m familiar with) is from Clan Douglas of Scotland. They bear argent a heart gules imperially crowned or, on a chief azure three molets of five points of the field. Supposedly, one of their ancestors, Sir James Douglas died taking Robert the Bruce’s heart on a crusade to the Holy Land – hence the arms. 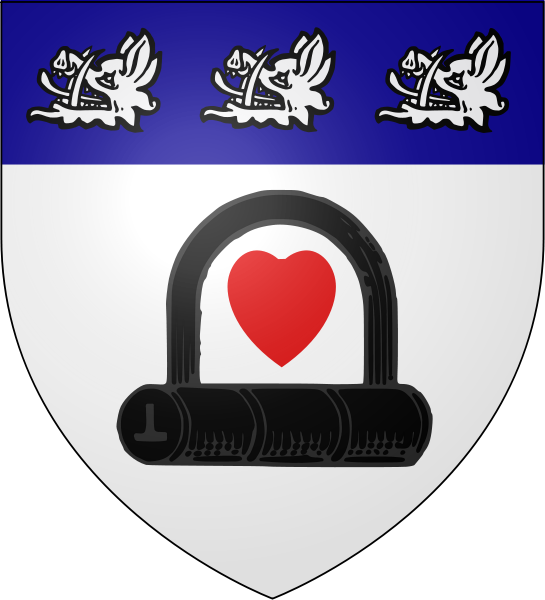 For a real example of massively self-evident canting arms, look no further than Clan Lockhart. As you might guess from the name, they bear argent a heart gules within a fetterlock sable, on a chief azure three boars’ heads couped of the field. The story goes that Sir Symon Locard accompanied Sir James Douglas and the heart of Robert the Bruce on crusade. He was responsible for carrying the key to the heart’s casket, and apparently ensured it got back to Scotland. I’m skeptical of the accuracy of the story, given how easily these arms could have been derived directly from the name, but it’s a nice legend.

Clement Attlee, Prime Minister of the United Kingdom from 1945 – 1951 (1883 – 1967) bore azure on a chevron between three hearts or winged argent, as many lioncels rampant sable. Attlee seems to have been the first armiger in his family when he was created Earl Attlee and a Knight of the Garter. The winged hearts were apparently drawn from his boarding school, Haileybury. 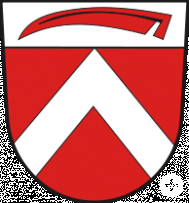 Blazon: Gules a chevron, on a chief argent a scythe blade fesswise of the field

Sadly, Nellingsheim doesn’t have any information about the arms themselves, but it’s been around for quite some time – it was first mentioned in 1111. Apparently, the von Ows owned the village for a time, starting in 1319, but it changed hands fairly frequently after that. (There’s not much overlap between the arms of the von Ows and the town, so that’s a dead end there.) However, the description of the town as retaining some of its rural or rustic characteristics might hint at a reason behind the choice of the scythe.

Blazon: Gules a chevron argent between three molets of six points, on a chief or an oath staff (Schwurstab) fesswise sable

Okay, I really like these arms, and not just because they feature a charge I’ve never seen before. The three townships of Nellingsheim, Remmingsheim, and Wolfenhausen were consolidated into the municipality of Neustetten in 1971, and it’s clear that whoever designed the new town’s arms took care to pay homage to its component parts, and also create something visually appealing. I appreciate that kind of thoughtfulness in heraldic design. The Neustetten website also has a nice section on each former township and its arms, so although I don’t usually feature former municipalities, I’m going to make an exception over the next few weeks. Long story short – the chevron comes from Nellingsheim, the chief from Wolfenhausen, and the molets from Remmingsheim (although the number reflects the three former townships). Both the latter towns’ arms featured the Schwurstab, and the tinctures are also relatively consistent.

So… what the hell is a Schwurstab? The literal translation, which I’ve used in the blazon, is “oath staff.” From what I can find, it’s a pretty descriptive name – they seem to have been specially carved staves used in legal proceedings for witnesses to swear on. It seems like they served the same function as a Bible or other sacred text, only more secular.