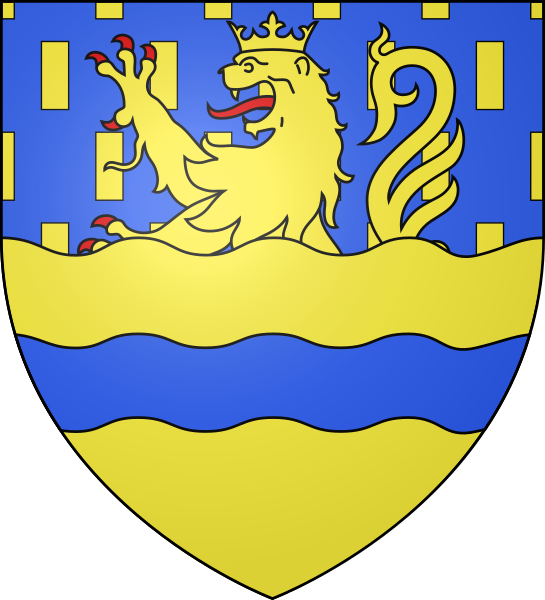 Blazon: Per fess wavy azure biletté and issuant from the partition line a lion rampant crowned or, armed and langued gules and of the second a fess wavy of the third

Unfortunately, I wasn’t able to dig up much background on these arms; I’m not even completely sure they’re official. The chief half is clearly Franche-Comté, since it’s in that administrative region. The fess wavy in the base half could be a representation of the Doubs river, but I’m not especially confident in that. 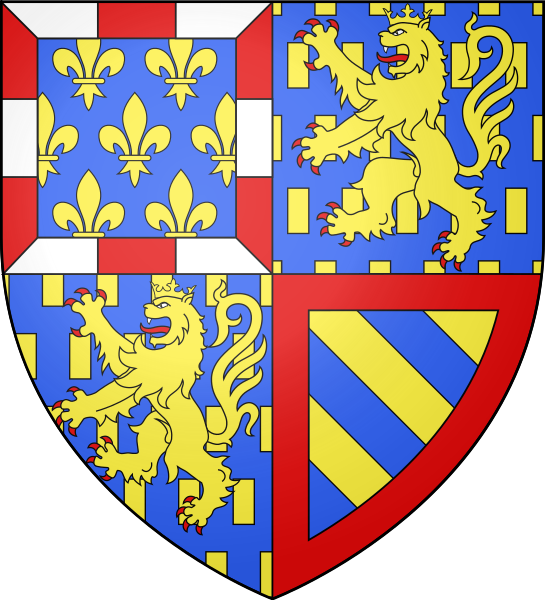 Blazon: Per quarterly I azure semé de lis or a bordure gobony argent and gules, II and III azure biletté and a lion rampant crowned or, armed and langued gules, IV bendy of six or and azure a bordure gules

This is why I’m glad I’m revisiting these! As it turns out, there was an administrative reorganization of France in 2016 – and I did most of the regional French arms in 2014, so some of these arms are going to be brand new! (To me, at least.) Some regions did stay the same, but Bourgogne-Franche-Comté is only about three and a half years old. That being said, the design operates on pretty much the same principle as the name – the first and fourth quarters come from the former arms of Burgundy, and the second and third are the former arms of Franche-Comte.

The Burgundian quarters are, respectively, the arms of the county (later duchy) of Touraine and the House of Burgundy. The arms of Franche-Comté were allegedly adopted by Count Palatine Otto IV in 1280 when he switched his allegiance to France from the Holy Roman Empire. He previously bore gules, an eagle displayed argent, but opted for the azure and or to mimic the French arms.

Blazon: Per quarterly I and IV gules biletté and a cross fleuretté or (Villequier), II and III azure a fasces proper surmounted by a fess charged with three molets of five points or (Mazarin), overall in the fess point an escutcheon argent a chevron between seven martlets 4 and 3 gules (Aumont)

Blazon: Per quarterly I and IV per pale gules a horse salient to the sinister argent (Westphalia) and barry of ten sable and or a ducal coronet in bend vert (Saxony), enté en pointe argent three crampets 1 and 2 gules (Angrie); II argent biletté and a lion rampant sable, armed and langued gules (Chablais); III sable a lion rampant argent, armed and langued gules (Aoste); overall in the fess point an escutcheon gules a cross argent (Savoy)

Blazon: Per quarterly I and IV, argent a chief gules (Cromwell), II and III chequy gules and or, a chief ermine (Tattershall), overall a bend azure; all impaled with azure bilette and a fess dancetty or (Deincourt)