Blazon: Gules a bear erect argent muzzled of the field collared and chained or supporting a staff raguly of the second, the chain reflexed over the back and encircling the staff; on a chief of the third three cross crosslets of the first; the shield ensigned with a mural crown or

The bear and staff have been used as symbols of the Earls of Warwick since at least 1268. One source gives their origin in medieval legend; the name of one Earl of Warwick, Arthgallus, was supposedly derived from “arthos,” or “bear”, and another was said to have used a broken tree branch to kill a giant. (There is no solid proof for either of these assertions.)

Blazon: Or a fess wavy azure between in chief a bear passant sable and in base a rose gules

These are canting arms, displaying a bear (Bär) and a river (Bach).

The bear is drawn from the arms of the local monastary of St. Gallus; legend has it that a bear helped the saint build a hermitage. There is another legend that, in 1576, the village of Appenzell mocked the symbol of the city (then called St. Gallen) as not masculine enough. This apparently contributed to a military conflict between the areas. The current design is the result of a 1975 contest. 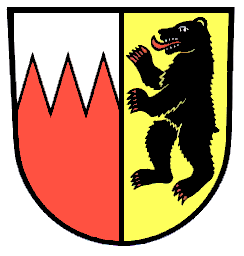 Blazon: Per pale gules a chief dancetty argent (from the arms of the former municipality of Gößlingen) and or a bear rampant sable, armed and langued gules (from the former arms of Dietingen)

Blazon: Argent a bear rampant sable upon a base vert

Blazon: Argent a bear rampant sable, armed and langued gules, bearing an escutcheon per bend sinister of the second and the first

Blazon: Azure on a pile or between in dexter a pine tree eradicated and in sinister a garb bound to a sickle, all proper, a bear rampant sable langued gules and bearing in the dexter paw a spoon argent