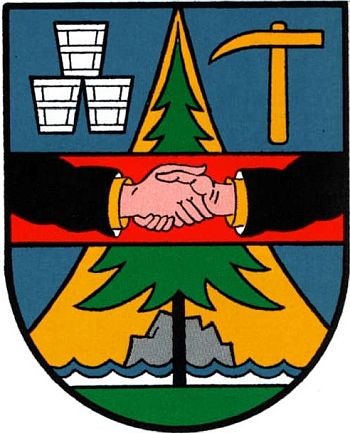 Blazon: Or issuant from a base vert a tree, surmounted by a stone reservoir proper

I don’t have a lot of information about these arms, but I’m also not sure there’s much to say. The reservoir or pool (alberca) is a canting element; the town has borne this name since its origins as an Arab settlement. The Záncara is a local river, and I’m afraid that’s all I’ve got.

Blazon: Argent a lion salient or langued gules on a base sable

It’s really an open question whether these are official arms or not; they don’t seem to have any tinctures specified, and I have no idea how long they’ve been in use, but look at them! That has got to be one of the weirdest lions I’ve ever seen, and I have seen some weird lions. It’s not just this depiction, either. The pose! The head! The tongue! It’s glorious, and I needed it on my blog. Thank you for sharing this absolute fucking horror with me.

(Right, I should also say that the family who originally ruled the area from the 1300s through 1695, the Megenzers, had some really beautiful and unique arms that I’m not entirely sure how to blazon – but you’ve got to respect a town that says no, never mind that, we’re going with that goddamn lion.) 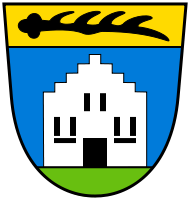 Blazon: Or a stone column* proper on a base vert, in chief a cross of Calatrava gules

Obviously, these are partly canting arms, but I’m more intrigued by the stone column. One of the sources I found implies that these arms are significantly older and, moreover, that there was actually a column in the town square in the 16th and 17th centuries. It seems the column was demolished sometime before 1639, but I have no idea why. It also seems that the original use of these arms dates back to around the same time, and putting a local landmark on municipal arms is an extremely common practice.

*I know, but I’m trying very hard to be mature about it, and the… distinctive shape seems to be unique to this particular depiction