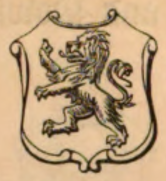 It does seem that Marchweithian was a real person, most likely living in the latter half of the eleventh century. This, of course, would place his lifespan well before heraldry took any kind of recognizable shape. The arms which the Burkes attribute to him are those of the Price family, who claim descent (correctly or not) from Marchweithian. 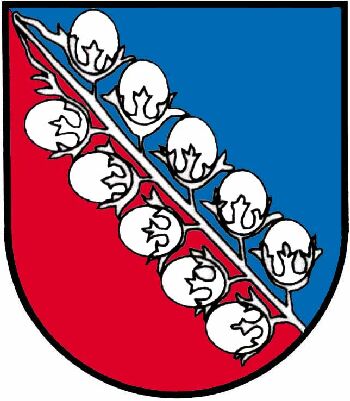 Blazon: Per bend azure and gules, a hazel branch in bend fructed with five nuts on each side argent

Disappointingly, I don’t have much information on these striking arms. It’s possible the branch may be a canting element – Staude meaning “bush” or “shrub” – but I have to admit I’m reaching there. Regardless, I appreciate the symmetry and simplicity.

Blazon: Azure two cornucopias in saltire ensigned by a crown or, the dexter filled with wheat and the sinister with fruit all proper

While I cannot find any specific rationale behind these arms, it’s highly plausible that the dual cornucopia is a reference to the remarkable fertility of the region; it was part of the area called “Campania felix” in the Roman era, or “fertile countryside.”

It seems that William had a decent, if not especially distinguished military career, including service in Scotland and France. He was implicated in the death of Piers Gaveston, but ultimately pardoned. He had at least ten children with his wife Maud Lovel, possibly more. His descendents, the junior line, were called the la Zouches of Harringworth, after the manor William inherited upon his mother’s death in 1299. Alan’s descendents were referred to as “of Ashby.”

Personally, I think this artist’s placement of the bezants is correct, or at least the most intuitive. Specifying the position of the charges wasn’t standard in English blazon at the time the Dering Roll was composed.

These are obviously the arms of Aragon, which probably ended up associated with Pyrénées-Orientales via the county of Roussillon. Given the significant influence that Aragon had over what is now southern France, it’s not surprising that their arms kind of end up all over this region. However, these are definitely not official arms, and their connection with the department is tenuous. 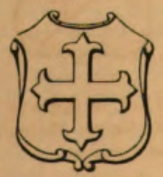 “Lord of Isdulas, Founder of the X. Noble Tribe. Vert, a cross flowery or.”

It does seem likely that someone named Braint Hir did, in fact, exist, although when is not completely clear. It seems most likely he was alive in the late ninth century (possibly born circa 880), although several sources place him much earlier, near the end of the sixth and early seventh centuries. However, it is probable that the earlier date is a misunderstanding based on a bad translation of the Historia Regum Britanniae. (Obviously, the arms depicted by the Burkes are spuriou. He must have died well before the documented use of heraldry in Wales – even the later date doesn’t get him that far. Besides, I’m not at all confident that there are credible sources for the arms of someone who doesn’t have a definitive birth and death date.

Presumably, the castle represents the local castle, Rochafrida Castle, dating back to the 13th century. I’m afraid I’m not sure about the keys, though. (I don’t quite know how I feel about describing keys as “affronté”, or “facing” each other, but it is the opposite of “addorsed”, and “wards to the center” seemed unnecessarily wordy. To be fair, the Spanish equivalent “afrontadas” is used in the original grant.) 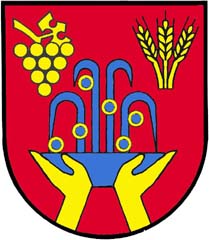 Blazon: Gules two hands issuing from the base of the shield or bearing a fountain azure sprouting pearls of the last fimbriated; in dexter chief, a bunch of grapes slipped and leaved, in sinister chief three stalks of wheat, all of the second

The grapes and wheat represent the ancient cultivation of wine and grain in the region, and the fountain is a reference to the local spring, which is the source of Römerquelle mineral water. Presumably the “pearls” are intended to represent carbonation.

I do not know why I have such a viscerally negative reaction towards these arms. Maybe it’s the loud primary colors (although I will admit they are VERY visible); maybe it’s the relatively high number of charges; maybe it’s how crowded everything looks. Maybe it’s the baffling inclusion of pearls. I don’t know. Not my favorite.