Blazon: Or two palets wavy azure, a chief per pale of the last semé de lis of the first within a bordure gobony argent and gules and bendy of six of the first and second and a bordure of the fourth

Okay, okay, technically these aren’t official arms. They were designed by Robert Louis, a French heraldic artist who is probably most famous for his series of heraldic postage stamps. It doesn’t look like they were ever adopted by the department, but they do look pretty good, so I’m going with it. You may recognize the arms on the chief as Touraine and Burgundy, respectively. I don’t know this for absolute certain, but I’m willing to bet that the blue wavy lines represent the two rivers that give the region its name. 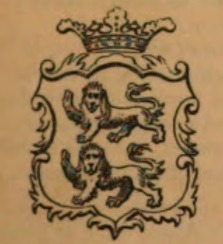 The Burkes have kindly included a list of all the monarchs since the Conquest with their associated arms. Given their somewhat spotty record on historical accuracy, this should be fun.

First up, of course, is William the Conqueror! They do get this one right – I’d be shocked if they didn’t – with the classic gules two lions passant guardant or. They also include a line about the lions vs. leopards controversy, but come down (correctly) on the side of lions. Some heraldic texts, especially older ones, will describe lions passant as leopards; this is most likely due to a mistranslation. While English blazon borrows a significant number of words and phrases from French (tenné, purpre, semé, etc.) it’s important to note that they are not identical. In French blazon, the position “rampant” is called “lionné,” and “passant guardant” is “leopardé.” Hence, the arms of Normandy, Aquitaine, and England would all contain lions leopardé. Add to that the somewhat… loose medieval idea of what big cats looked like, and you can see where confusion would arise. 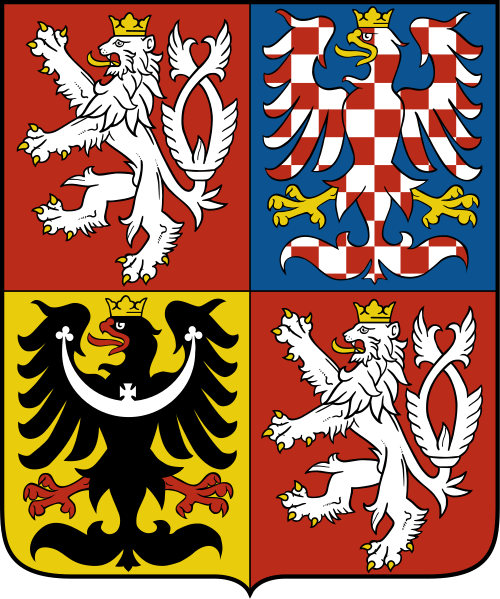 I had a few options for national days of the Czech Republic. As you can see, I ended up going with Czech Statehood Day, which commemorates the feast day of St. Wenceslaus, also known as Wenceslaus I or Good King Wenceslaus, who is the patron saint of the Czech Republic. (Sounds a little nicer than, “on this day, over a thousand years ago, the king got stabbed by his brother with a lance.”) Like many countries made up of numerous historical regions, the Czech coat of arms features three individual coats: Bohemia in the first and fourth quarters, Moravia in the second, and Silesia in the third. The full blazon is as follows: Per quarterly, I and IV, gules a lion rampant double-queued argent, armed, langued, and crowned or (Bohemia); II azure an eagle displayed chequy argent and gules, armed and crowned or (Moravia); III or an eagle displayed sable armed and langued gules, crowned of the field, charged with a cross couped issuant from a crescent argent (Lower Silesia).

The first properly Czech state was the Duchy of Bohemia, which became part of the Great Moravian Empire around 830. Bohemia was established as a kingdom around 1198 by Ottokar I, and by 1300, the double-queued lion with the crown was firmly established as the arms of Bohemia. There’s a legend that in the 12th century, Emperor Frederick granted Vladislaus II the arms of gules a lion rampant argent to symbolize his valor, and the second tail was added later, as recognition for the military assistance Ottokar I provided against the Saxons. It’s a nice story, but it’s exactly the kind of unfalsifiable nice story that a lot of arms have, which is to say that it has the ring of a post hoc justification to me. In any case, the first depiction of these arms was in Gozzoburg Castle, which was probably built in the early- to mid-thirteenth century.

Not that the lion isn’t cool and all, but I can’t not mention the arms of the Přemyslid dynasty. They ruled Bohemia, first as dukes, then as kings, and other assorted parts of Eastern Europe for a good four and a half centuries. St. Wenceslaus, was a member, and their arms were a full-on FLAMING EAGLE. Er, argent an eagle displayed sable armed or enflamed gules. I will confess that, while I understand the desire to represent all the areas of the Czech Republic in the national arms to honor their unique histories and legacies, if I were designing these, I would not be able to resist the temptation of the flaming eagle. It’s just really cool! There are also some great myths around its origin, including one where Břetislav I gets the right to light his father-in-law’s lands on fire for some reason.

Ahem. Anyway. Moving on. Moravia (second quarter) got its start as Greater Moravia in 833; in the 890s, it covered a significant amount of territory and became known as the Great Moravian Empire. It was then promptly overrun by Magyars in 907. After Emperor Otto I defeated the Magyars in 955, Moravia found a second life as part of the Bohemian crown, and reached the status of a margraviate in 1182. The eagle chequy shows up shortly afterwards in 1233, on the seal of the Margrave Přemysl, a younger son of Ottokar I. I don’t think it’s too much of a stretch to assume this eagle might have some relation to the Přemyslid eagle, but it’s not completely clear. However it got there, it stayed pretty much the same until the establishment of Czechoslovakia in 1918. Some depictions have the chequy as or and gules, but it doesn’t seem like the distinction has any particular meaning.

Lastly, in the final quarter, are the arms of Lower Silesia, which we’ve touched on before. In my opinion, it’s far more justifiable on the Czech arms than on those of Liechtenstein, given that the Czech Republic does actually include parts of Silesia (though most of it falls in Poland). Silesia came under control of the Greater Moravian Empire sometime in the 9th century. It later passed to Poland and Germany before becoming part of the Crown of Bohemia in 1434. The exact ownership of Silesia fluctuated along with the rest of the borders in Eastern Europe, but it is today split between Poland, Germany, and the Czech Republic. The Silesian arms date back to around 1335; they seem to have derived from the Duchy of Wroclaw. I’m not entirely sure where the eagle comes from, but honestly, there’s no shortage of eagles in this part of the world. Could be the Přemyslids; could be the Piasts; could be the Holy Roman Empire. In the absence of a direct blood tie (like there is with Moravia), it’s not clear. 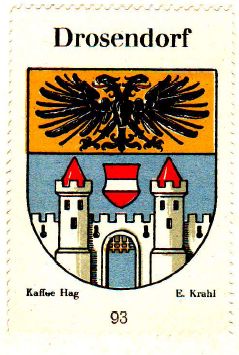 Blazon: Azure a city gate argent, roofed gules, in the center chief an escutcheon of the last a fess of the second (Austria); on a chief or, a double-headed eagle displayed gules.

The city was designated as an imperial city in 1278 after holding out for over a week while under siege from the army of the Bohemian king Ottokar II. Rudolf von Habsburg eventually instigated the Battle on the Marchfeld, where Ottokar II was killed. It seems likely that the escutcheon of Austria and/or the imperial eagle in the chief are due to the imperial city status. 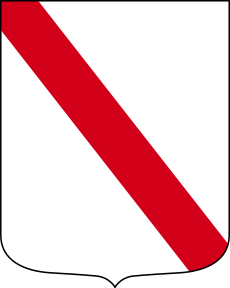 Unfortunately, I’m afraid that the lack of information on these arms is pretty typical of very simple coats. I don’t necessarily mean a lack of information on the history of the arms – Campania first adopted arms in the thirteenth century, which featured both the bend gules and a Maltese cross (from the arms of Amalfi), so the history of the bend is well-established. No, I mean I have no goddamn idea where the bend comes from. Honestly, there might not be much of a reason, which is not my favorite answer, but still a possibility.

Blazon: Or a stag statant gules; on a chief of the last, an ear of wheat fesswise of the first

Sadly, information is thin on the ground here. It sounds like the town was, at one point, included in the duchy of Swabia, but the three black lions don’t make an appearance here. Given how many other local municipalities use or and gules as a reference to Tübingen’s arms, it seems reasonable to speculate that the same applies here, but I don’t know for sure.

This Gerard de Lisle wasn’t quite renowned enough for a title or his own Wikipedia page, but his grandson was! Gerard received the manor of Kingston and the right to bear the FitzGerold arms from his mother, Alice FitzGerold. There seems to be some disagreement as to whether the lion in the FitzGerold arms should be passant or statant, but given the somewhat informal nature of heraldic illustration in the medieval period, I have no doubt that it’s been shown both ways.