(This was supposed to post yesterday, but there were technical issues. My apologies.)

Happy 28th birthday to Ukraine! (The Declaration of Independence was accepted by the Verkhovna Rada, or Ukranian parliament, on August 24th, 1991. It took a little while to finalize things with a referendum, but this is the formal national holiday.) The Ukrainian national arms are beautiful, striking, and (at least to me) not remotely obvious. Once you know that the tryzub is a trident, you can see that in the charge, but the elaborate, intertwined style isn’t very common in other European styles of armory. This specific design goes back to 980, and a less stylized version to 945. It seems to have been the arms – or at least, the family symbol – of the Rurik dynasty, showing up on coins, seals, stones, and personal items. 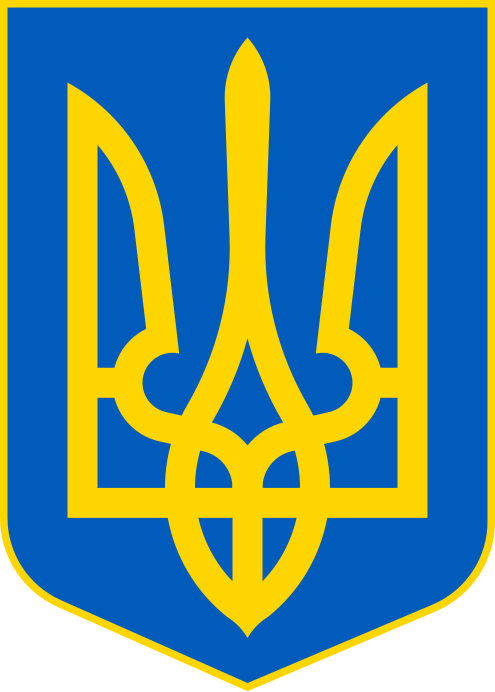 The tryzub also might not have started out as a trident, although it definitely ended up that way. As a charge, it seems similar to the fleur-de-lis: it’s currently widely accepted as a specific shape with a specific name, but no one can quite agree on what it was originally intended to depict. Theories include a symbol of the Holy Trinity, a gyrfalcon (very likely), a bident, or the Cyrillic letter У (extremely unlikely).

While the tryzub is very old, and definitely has seniority as a state symbol, there have been a number of different coats of arms associated with different regimes. In the twelfth through the mid-fourteenth centuries, West Ukraine was the Kingdom of Galicia–Volhynia (or Ruthenia, starting in 1253) and bore azure a lion rampant or. After 1349, this particular region was incorporated into Poland, but the lion hung around as the arms of the Ruthenian Voivodeship, and it currently survives in the arms of Lviv. The short-lived Ukrainian State used azure a Cossack proper clothed and with a rifle or, which had formerly been used by the Zaporozhian Host. These arms also had the tryzub as a crest, but they didn’t survive the collapse of the Ukranian State less than a year after its creation. The tinctures have been pretty consistent no matter the charges – always yellow on blue.

The less said about the deeply boring symbology of the Soviet era from 1919 through 1991, the better. If you’ve ever seen anything related to the Soviet state, you already know what the emblem looks like – sickle, hammer, rising sun, etc. Thankfully, the current arms were granted in 1992, less than two months after vote on Ukrainian independence from the Soviet Union was finalized, and they are a significant improvement. (That link, by the way, has very specific instructions on the measurements and proportions of the tryzub if you’d like to try your hand at it.)