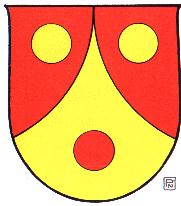 Blazon: Gules pointé in base or, three roundels counterchanged

The partition of the field is from the arms of the Lords of Goldegg, who held (disputed) control over the valley from 1272 presumably through the house’s extinction in 1449. The roundels are derived from the arms of Nonnberg Abbey, which formerly held possession of the village of Unterberg, one of the six villages included in the municipality. (You can see the abbey’s arms on the dexter here, though the tinctures are hard to make out; the sinister arms are those of the Schneeweiß family.)