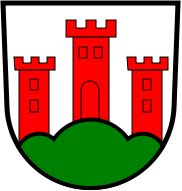 Blazon: Argent on three mounts in base vert as many towers gules

The town probably originated as a possession of the house of Roggenbach, though it passed to the monastery of St. Georgen by papal decree in 1187.

Blazon: Per bend argent and vert, in chief a sheaf of wheat bendwise or surmounted by a sickle palewise of the first; in base a palm leaf of the second bendwise ensigned by a crown gules

The palm and crown represent the martyrdom of St. Stephen, the patron saint of the town, while the sickle and wheat allude to the importance of local farming.

Blazon: Or eight torteaux in orle

Another potential arrangement of the torteaux in the Medici arms. 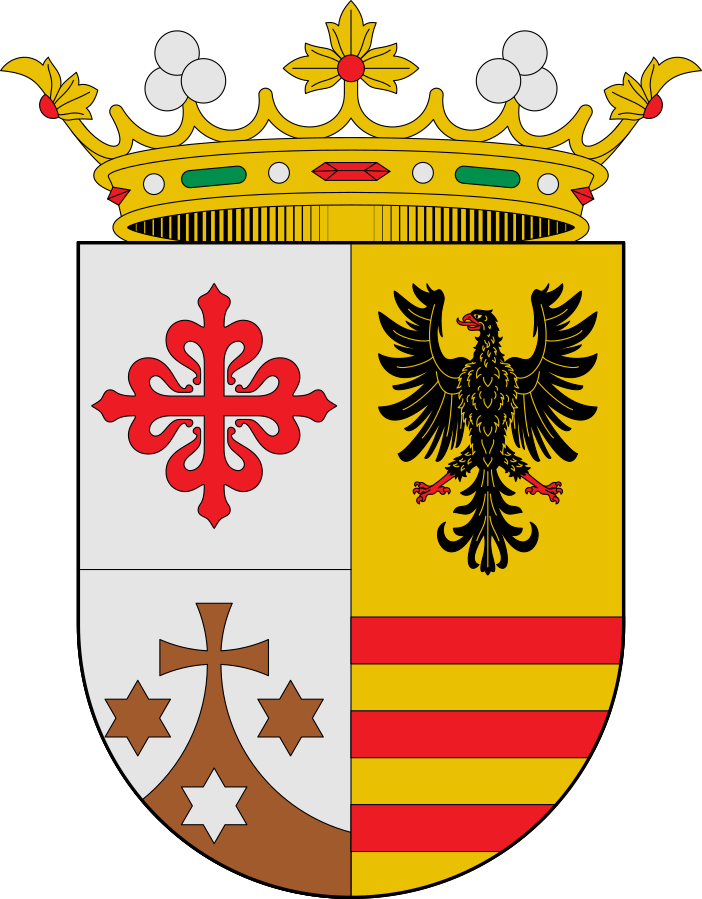 Blazon: Per quarterly I argent a cross of Calatrava gules, II or an eagle displayed sable armed and langued gules, III argent a point in point terminating in a cross paté sanguine, three molets of six points counterchanged, IV or three bars gules

The Order of Calatrava owned the region between 1180 and 1547, and the first quarter of the arms most likely reflects this fact. In the early 18th century, the area and its corresponding title Marquis of Malagón passed via marriage to the Medinaceli and Córdoba families; the arms in the last quarter are those of Córdoba.

The town was first mentioned by name in 797 as part of a donation to the monastery of St. Gallus.

For the pale in Arms, representeth a post of Timber, set upright, such as be commonly used, to under prop the earth from falling upon the miners’ heads.

The origins of all of the ordinaries are unclear, but the theory Ferne cites above is a fairly common one about the pale. Unfortunately, it’s likely that we will never be able to know for sure.

The village is located in the Bregenzer Wald area, which is symbolized by the pine tree. The three molets stand for the three municipalities incorporated to form the modern Damüls: Damüls, Uga, and Schwende.