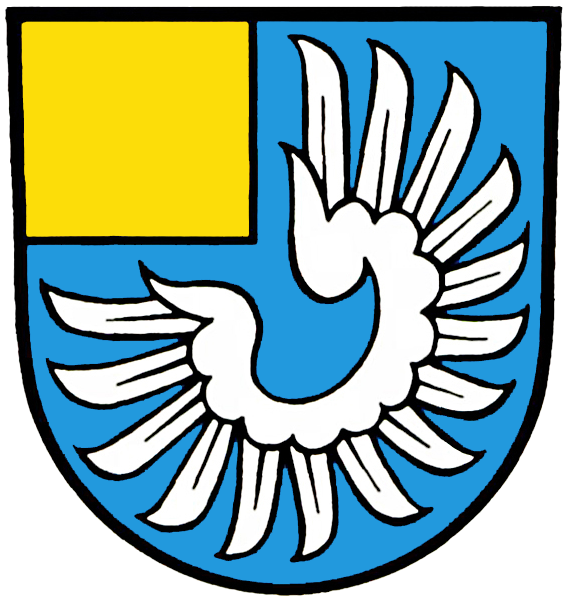 Blazon: Azure a sinister wing argent and a canton or

There are records of a Vellberg family dating back to 1102, but the line died out in 1592, and Schwäbisch Hall purchased the city in 1595. 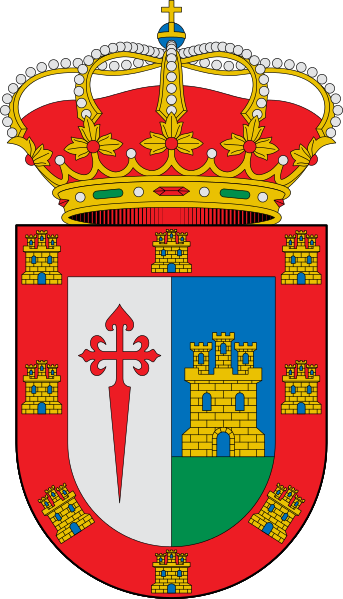 Blazon: Per pale argent a cross of Santiago gules and azure on a base proper a castle triple-towered or, all within a bordure of the second charged with eight castles triple-towered of the fourth windowed of the third

The castle that appears in the arms and gives the town its name is at least 800 years old, probably older. The settlement that eventually became Castellar de Santiago may have begun in the fortress once it was no longer used for defensive purposes. Blazon: Gules on a mount Kürsch in base six pine trees 1, 2, and 3 between two eagle wings addorsed sable

This is another good example of the heraldic fur Kürsch. It is sometimes rendered in English blazons as “fur” and has no set tincture; it is always assumed to be proper.

Blazon: Per fess argent a cross of Santiago gules and or issuant from water in base barry wavy azure and the first seven reeds vert

The cross of Santiago probably refers to the multiple conquests of the town by the Order of Santiago – once in 1186 and again in 1212. The Order was later granted the area around the town in 1243, before it was later given to Pedro Díaz de Monsalve in 1387. The reeds (or carrizos in Spanish) are drawn from the name of the town.

Blazon: Per chevron argent and gules in chief an hourglass proper between two estoiles of six points azure, in base three cannon barrels erect palewise proper, each charged on the breech with a lion’s face or

Motto: We govern by serving

The hourglass and estoiles refer to the Greenwich Observatory, and the cannon barrels to the Royal Arsenal.

Blazon: Azure a lymphad without sail terminating in lion’s heads at the bow and stern or

The first mention of the town was in 1216 under the name “Muncheim.” The Lords of Enslingen controlled the region in the 13th century, though no trace of their arms remains in the current iteration.

Blazon: Gules a fess argent surmounted by a plowshare sable

The arms of the town are derived from those of the Babenbergs with the plowshare representing St. Cunigunde, who walked over red-hot plowshares to prove her innocence of adultery. Some older depictions of the arms show the plowshare as or.

Blazon: Per pale or a bull passant gules on a base vert within a bordure of the field charged with eight flames of the last and barry of six or and gules*

Rodrigo used these arms at least since his election to the papacy; he may have taken that opportunity to add to his family’s traditional arms. I cannot find any record of the origin of the sinister arms, though several other later Borgias used them as well. They may be a reference to the arms of Aragon, where he was born.

Blazon: Per pale azure on a mount in base proper a path argent leading to a castle triple-towered or and of the second a cross of Calatrava gules

The castle in the arms probably refers to the Castillo de Salvatierra, a local fortress built by the Romans and later used by the Muslims during Reconquista. It is mostly destroyed today.